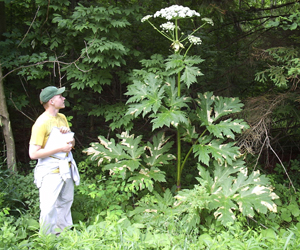 Giant hogweed has plagued New York for decades, but experts believe it could be on its way out. Image: New York Department of Environmental Conservation

Giant hogweed, a plant that grows up to 14 feet tall and can burn and scar people, is on its way out in the state of New York.

“I would definitely guess that we are controlling giant hogweed faster than it is spreading,” said Daniel Waldhorn, giant hogweed information line coordinator for the New York State Department of Environmental Conservation.

His agency tracks the locations of the plants so they can go to the site every year to kill new ones that have grown, Waldhorn said. Giant hogweed sprouts in bunches and its seeds are heavy, which means they don’t spread far and often grow in the same area every year. As time passes, we’ll see more empty sites because the plants take years to flower, which allows them to reproduce, he said.

The plants are easier to kill when they aren’t as dense because there are fewer stems to cut. Herbicides, which are used to kill large groups of plants, aren’t as effective as stem cutting.

Giant hogweed originates from Asia and was brought to the United States as a showpiece for gardens. The plant has spread across Midwestern and Eastern states in the northern U.S. over the past couple decades.

Giant hogweed produces a sap, which causes third degree burns or blindness, if it gets in your eyes.

While the spread of giant hogweed in the U.S. remains a problem, New York’s control methods are working, Waldhorn said.

Waldhorn said he doesn’t think giant hogweed has spread significantly since 2008, rather more is being reported and found, which is why the number of locations have  grown.

One of the biggest challenges in controlling giant hogweed is when the plants grow near rivers and streams, Waldhorn said. This is how the plants can spread, when seeds fall into the water they can be transported to a different area and start a new area of plant growth.

It will likely to take decades to completely eradicate giant hogweed, but it could be controlled to a point it’s not a major problem within the next few years, he said.

It is hard to identify because it is similar to another plant, he said.

“Hogweed’s dangerous in the sense that it looks just like cow parsnip only it generally grows much bigger,” Gillingham said.

Waldhorn said as plants grow larger and become distinguishable from cow parsnip, more will be reported and killed.

New York’s control program takes calls and emails from people who believe they have found the plant, he said. The agency asks for the location and pictures of the plant and then sends people to exterminate them with herbicide or by cutting the stem. Waldhorn said this is a cost-efficient way of controlling the species.

Regardless of cost, Gillingham said the people of New York have a responsibility to see that the plant is eradicated from the state.

“We as a society have been a part of bringing the exotics [invasive species] into our habitat and it’s our responsibility to keep them under control,” Gillingham said.