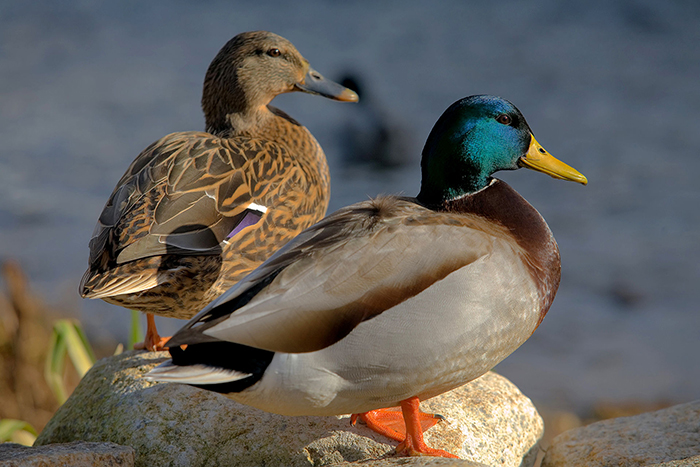 At least when it comes to wetlands management.

That’s the lesson from a new study that found wetlands conservation projects designed to benefit waterfowl also provide a boost other critters.

“The biggest take-home message for folks is that these wetlands that we’re managing for waterfowl come with this other suite of benefits for other species of birds and frogs,” said lead author Doug Tozer, a program scientist at Bird Studies Canada in Port Rowan, Ontario.

Management of publicly and privately owned wetlands includes measures such as diking to regulate water levels and control of invasive species.

The study said wetlands are good for sequestering greenhouse gases, commercial fishing, flood control, mitigating pollution, recreation and other ecological and societal benefits. “Most importantly, they are critical hotspots for biodiversity conservation.”

Ducks Unlimited estimates that 60 percent of historic wetlands in the Great Lakes region have been lost for reasons that include poor water quality and invasive species.

“In Michigan,” for example, “breeding mallard numbers have dropped 50 percent,” the organization says.

The new study published in the “Journal of Environmental Management” compared 42 wetlands managed under the North American Waterfowl Management Plan with 52 similar unmanaged wetlands. Most are in southern Ontario and the rest are in Michigan.

The observations and counts of bird and frog populations came from citizen-scientists working with the Great Lakes Marsh Monitoring Program.

Compared to unmanaged areas, the number of non-waterfowl species, including at-risk and “priority conservation concern” species such as the black tern, common gallinule, least bittern, sora and Western chorus frog, “was higher in conservation project wetlands.

However, not all non-waterfowl species appeared better off in managed wetlands.

Among the 22 bird and frog species studied, Tozer said mute swans and Eastern great tree frogs were the only two with a predicted occupancy rate higher in unmanaged wetlands, “but not significantly higher.”

Occupancy estimates the actual proportion of sites where a species is present. There’s a distinction between occupancy and occurrence because a species can be present but unobserved during a survey because it didn’t call or show itself, observers missed it or it was temporarily away from the site during the survey, he said.

“It’s not wonderful for everything,” Tozer said of managed wetlands. “The main message is that our existing dikes and managed wetlands have these benefits, but that doesn’t mean we should do this in every wetland across the landscape. “Some groups of animals won’t benefit as much, such as fish.”

For example, water control structures can restrict fish access, and diking can be bad for wet meadow communities.”

Tozer said a future research project in New York will look at “a whole suite of responses in three wetlands treatments” – full, partial and no water drawdowns – to study the impacts on waterfowl, plants, marsh birds, seeds and tubers as waterfowl forage, and submerged vertebrates.

Meanwhile, conservation groups are working on wetlands projects throughout the Great Lakes region. Last year, Ducks Unlimited and its partners completed projects on 1,164 acres in 17 counties, including Lenawee, Manistee, Mason and Newaygo.

Major projects in 2016 included replacement of a pump that enables the Michigan Department of Natural Resources to control water levels at Manistee Marsh in the Manistee River State Game Area and the Maankiki Marsh restoration project that converted former farmland into wetlands in the Shiawassee National Wildlife Refuge near Saginaw Bay.