This story originally appeared on MichiganTrailMaps.com and is republished here with permission. 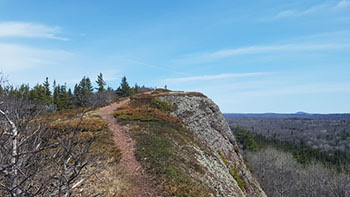 What astonished me the most the first time I stood on Mount Baldy at the tip of the Keweenaw Peninsula wasn’t the view even though it’s one of the finest mountain-top panoramas in Michigan.

It was the fact I had never stood on it before.

After four decades of trekking from one corner of the state to the other I was amazed there were still spots like this left for me to discover.

“It’s something up here, isn’t it?” a local hiker with me said. “It’s like you’ve just climbed a mountain and there are not many places (in Michigan) where you can do that.”

No there isn’t, but you can here because in 2001-02 the Nature Conservancy purchased 1,531 acres that included a half-mile of shoreline on Lake Bailey, steep wooded slopes and rare plant communities. But the crowning jewel of the tract is the rocky knob of Mt. Baldy.

Originally known as Lookout Mountain, Mt. Baldy earned its new name because of the way high winds have shaped the vegetation and rocky terrain at its highest elevations. While bedrock balds are common in the Appalachians and adjacent Canada, such ridge-top communities are extremely rare in Michigan and occur only in the western Upper Peninsula from Isle Royale to Gogebic County. Mt. Baldy, with its natural alpine-like vegetation, is the largest and least disturbed bald remaining.

Towering 730 feet above Lake Superior south of Eagle Harbor, Mt. Baldy is protected as part of the Helmut and Candis Stern Preserve. The preserve includes a craggy, mile-long ridge with several openings featuring alpine plants and wind-contorted white cedars and oaks. During spring and fall migrations an amazing array of birds pass over Mt. Baldy.

But what stuns most first-time visitors isn’t the birds or the plants but the views. This 1,335-foot mountain offers spectacular panoramic views of Lake Superior and almost the entire tip of the Keweenaw Peninsula. 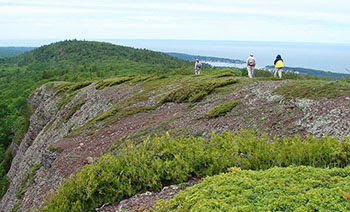 The hike to the peak is a one-way climb of 3.4 miles along two-tracks for the most part. The old logging roads are well-marked by the Nature Conservancy and easy to follow. Most hikers need two hours to reach the peak.

Before departing Eagle Harbor, make sure you have the three essentials for hike to Mt. Baldy: water, lunch in case you decide to take an extended break at the top and sun block if you end up spending the whole afternoon up there.

From M-26, opposite the Shoreline Resort in Eagle Harbor, head south on Eagle Harbor Shortcut Road. Within a third of a mile pull into the trailhead parking area marked by a large Nature Conservancy sign. A two-track heads west from here and at Mile 0.2 you arrive at a sandpit at the base of a large sandy hill.

At the top of the sandy hill you resume following the two-track and at Mile 0.8 arrive at a junction. The Mt. Baldy trail is the two-track that heads left to descend to Cedar Creek. Cross the bridge-less stream and resume climbing. The next 1.2 miles are uneventful with a steady ascent of more than 300 feet that remains in the woods. Halfway along it you enter the preserve and at this point the path is officially known as Nicole Bloom Memorial Trail, named for a Michigan Tech student and avid environmentalist who died in a mountain climbing accident the summer she graduated.

At Mile 2 you again follow the left-hand fork at a junction to remain on a rutted two-track that ascends steeply up the ridge another 160 feet. Suddenly you break out of the trees at what is commonly referred to as False Top. Some people occasionally mistaken the 1,266-foot highpoint for Mt. Baldy, but not often. Along with your first views of Lake Superior, you can clearly see Mt. Baldy rising above you to the east.

You descend back into the trees briefly and then make your final assault on the mountain. The hike ends as a stroll along a rocky ridge to the rounded dome that is Mt. Baldy’s 1,335-foot peak, reached at Mile 3.4. On the south side the ridge-line drops as a precipitous 230-foot rocky cliff, on the north side Mt. Baldy descend more gently as a forested slope towards Lake Bailey.

On a clear day the views are simply stunning, more than rivalling the famed Lake of the Clouds overlook in the Porcupine Mountains Wilderness State Park. What makes Mt. Baldy so spectacular is that the view is 360 degrees, a vantage point that allows you to see practically the entire tip of the Keweenaw Peninsula.

The great view at the top is the result of a habitat rarely found in Michigan; an alpine bald community where the plant life is sparse and low to the ground. What few oaks survive up here are stunted and barely knee-high, looking all the world like bonsai trees.

On Mt. Baldy you can sit on the edge of a sheer-sided bluff or lay in a grassy slope and spend hours gazing at the world below you. To the south you can see Mt. Bohemia and Mt. Houghton rising from the shores of Lake Superior. To the west you can spot the ribbon that is the Brockway Mountain Drive. To the north there is Lake Bailey right below you and the rugged shoreline of Lake Superior. To the northeast you can view the entire town of Eagle Harbor and, if the day clear, Isle Royale floating above a sea of blue on the horizon.

Everywhere you turn there is a wide expanse to ponder.

Might as well plop down and spend the afternoon here, secure in the knowledge that the return hike is all downhill.