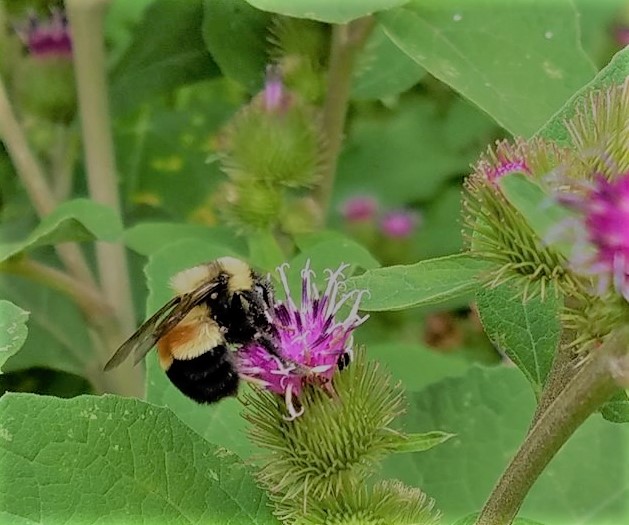 Scientific discoveries don’t always come from scientists in a lab.

Andrea Sampson Townsend made one in July when she sunk her feet into a small patch of colorful, black-eyed Susan and bee balm in southeast Minnesota.

Finding a bee seems like a small discovery, but Sampson Townsend didn’t find just any bee.

At first, she didn’t believe it, said Sampson Townsend, a first-year volunteer.

“My brain kept saying, you’re only seeing this rusty patched because you want to see it. What are the chances?” she said.

She took about 200 pictures with her iPhone, Sampson Townsend said.

“I think I put in the subject line in the email, ‘could it be’ and a question mark,” Sampson Townsend said. “And she put ‘yes, it is.’ Exclamation point.”

Her discovery is a big win for the University of Minnesota’s bee atlas.

The Minnesota Bee Atlas survey uses volunteers to study the range of bumble bees in the state and gather information about other species. The hope is to build a more robust catalog of Minnesota’s 425 documented bee species to better understand, and in turn, protect them.

The last Minnesota bee atlas featured 67 bees and was published in 1919.

According to the Fish and Wildlife Service, the rusty patched bumble bee once lived throughout the Northeast, Upper Midwest and parts of Canada.

It’s now found within 1 percent of its historical, geographic range — mostly localized areas of Minnesota and Wisconsin. There’ve been few sightings in other states.

Minnesota lacks range data for many of its bees.

It was one of two rusty patched bumble bees found this summer in places with no recent sightings, said Elaine Evans, an entomology professor and bee researcher with the University of Minnesota Extension.

Evans said the bees were established nearby, so they suspected their presence, but it wasn’t confirmed.

“We really just needed more people there looking, so that’s the nice thing about involving citizen scientists, that we can get more people covering more ground,” Evans said.

The project has 26 survey routes statewide.

The other rusty patched bumble bee was found in June on an assigned survey route in Kellogg, about two hours southeast of Minneapolis. 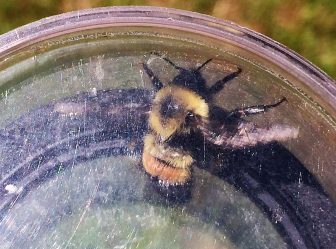 The bee was in a patch of crown vetch flowers along the roadside, said Chris Cowen, a second-year volunteer.

Cowen said his job as an environmental lobbyist spawned a hobby that includes beekeeping and identifying bees for the Minnesota Bee Atlas survey.

“Being a volunteer for this, it’s important work because what’s going on with honey bees is pretty well documented,” Cowen said.

“They have bee keepers. There’s some honey bees in the wild, but the vast, vast, majority of them are tracked, so it’s easy to document them, but there is very little good data on what’s going on with native bees.”

“It allows us to reach more areas in the state than if we had to travel ourselves, and as our citizen-scientist volunteers learn more about native bees, they in turn become educators and advocates in their communities,” Forsberg said.

Evans said she thinks a rebound is unlikely, but she hasn’t ruled it out.

She said scientists in England successfully reintroduced a species that disappeared in the country.

“First, they put in lots of good bumble bee habitats, and they reintroduced these species that had been lost from the area,” she said. “They were able to get those bees to successfully reproduce, and they are getting populations back of the species that have been gone from England for the last 20 years.”

The U.S. has recovery plans in place that include studying population stressors like pesticides and loss of habitat, Evans said.

Education is needed to make sure people look out for rusty patched bumble bees and understand that it’s illegal to harm one, she said.

The federal Endangered Species Act includes fines reaching up to $13,000, per incident, for those who kill, injure or capture endangered species. Evans said her volunteers are trained to release rusty patched bumble bees within minutes of taking a picture.

Other species are collected for the University of Minnesota’s insect library.

The survey continues through next summer through a grant from the Minnesota Environment and Natural Resources Trust Fund.

The university will publish the information in the Minnesota Bee Atlas, Evans said. The online database will include current and historical information on the bees found in Minnesota.

Evans said there are enough volunteers for their routes. She recommends joining Bumble Bee Watch, an effort to better map and monitor bees throughout North America.

Volunteers reported more than 20,000 bees since the project launched in 2013, said Rich Hatfield, an endangered species conservation biologist working on the project.