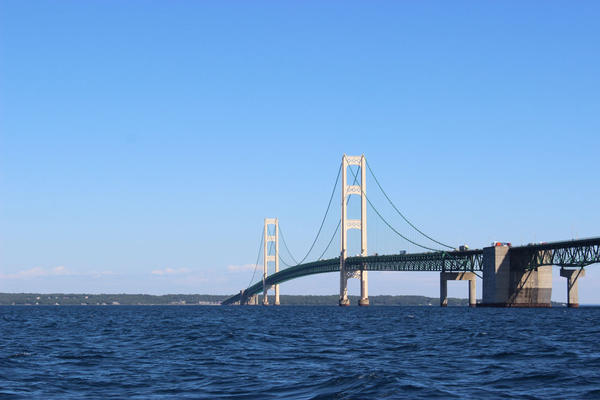 The state has released a list of possible alternatives to Enbridge’s Line 5, the oil and gas pipeline under the Straits of Mackinac. The report was written by a contractor and details some of those alternatives.

Line 5 is a 64-year-old pipeline that has generated a lot of controversy. The report was commissioned by the state to look at all the options for replacing it.

There are three different routes for a new pipeline considered, but the reports says only one is feasible. It would run 700 miles through Wisconsin, Illinois, Indiana and Michigan. That would take the pipeline around the Great Lakes, but the report says it would have more safety, environmental and economic risks than Line 5.

The report also looked at options for a new underwater pipeline in the Straits of Mackinac with a tunnel around it. The Attorney General’s Office likes this idea. Press Secretary Andrea Bitely said it would offer benefits to the state.

“That one could create infrastructure and construction jobs in Michigan, and also allow for a continuous visual inspection of the pipeline,” Bitely said.

But activists aren’t so excited. Several environmental groups held an online press conference shortly after the report was published.

David Holtz from advocacy group Oil & Water Don’t Mix questioned the motives of the report’s authors. Holtz says they take a very positive view of a new pipeline under the straits.

Liz Kirkwood from For Love of Water – or FLOW – says she doesn’t want anything to do with a new pipeline in the Straits.

“We feel very strongly that oil pipelines do not belong in the Great Lakes,” Kirkwood says.

FLOW had previously looked into alternatives to Line 5. They said in a statementthat a combo of tanker trucks and railcars could suuply propane to the Upper Peninsula.

The alternatives draft didn’t specifically mention propane in the Upper Peninsula. However, according to the report tanker trucks aren’t a realistic alternative to Line 5. The draft states that a tanker truck would need to leave every 40 seconds, 24 hours a day, to match the fuel that Line 5 transports.

The report also briefly discusses the risks of Line 5. It says an oil spill on the pipeline would cost anywhere between $100 and $200 million.

Enbridge did not make anyone available for comment but in a written statement said:

“Enbridge remains committed to protecting the Great Lakes and meeting the energy needs of Michigan through the safe operation of Line 5. We have never wavered from that commitment.”

The draft’s authors from Dynamic Risk Assessments Inc. will hold a public information session on Thursday, July 6th. The session will be held at Holt High School near Lansing, where they will present their findings and take questions from the public.

The Alternatives Analysis Report will be finalized after the public comment period closes in August.

*Correction: A previous version of this story stated that FLOW’s alternative was for tanker trucks and rail cars to carry oil. Their proposal was for carrying propane. This story has been edited to reflect that change.

This story was produced under a partnership of Michigan State University’s Knight Center for Environmental Journalism and Interlochen Public Radio.