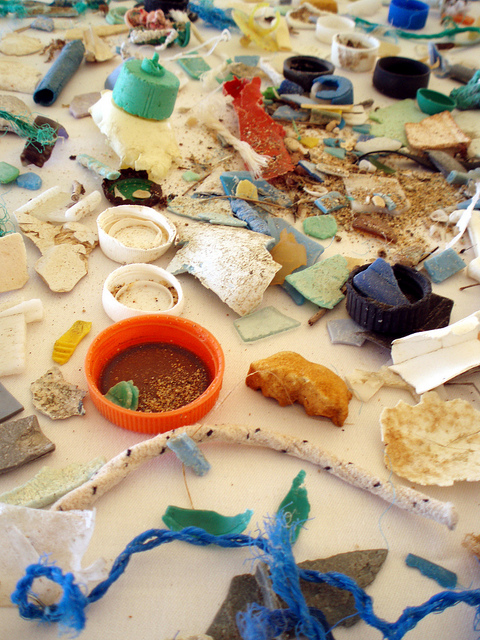 Researchers have developed a new way to source, track and estimate concentrations of plastic pollution in the Great Lakes.

The new mathematical model using National Oceanic and Atmospheric Administration data has discovered 80 percent of the plastic pollution sinks while the other 20 percent gathers on the shoreline or breaks down into micro plastics. And plastic from Chicago often crosses Lake Michigan and ends up on Michigan beaches.

The model was developed by two Rochester Institute of Technology professors.

“The amount of plastic that’s entering our waters is alarming and it is certainly something that we want to keep an eye on,” said Doug Pearsall, senior conservation scientist at The Nature Conservancy.

Pearsall said this research can help conservationists make better decisions regarding how to clean and preserve the Great Lakes region.

Such measurements are needed to accurately study the plastic’s effect on the environment, Hoffman said.

The goal is to understand the sources of plastic pollution around the lakes and model how pollution flows due to natural currents, wind patterns and the water flow from some lakes into others, said Eric Hittinger, who also developed the model and is an assistant public policy professor.

The model can run as long as it is updated with data. It does not run in real time, Hittinger said

Six years of data about currents that were measured every three hours are used in the model, Hoffman said

“The real limitation is in the data concerning actual currents around the lakes,” Hittinger said. “If we had more years of data, we could actually run it in longer timeframes.”

Hoffman said he was initially surprised that pollution does not remain floating in the middle of the lake but is often pushed until it accumulates on beaches, sometimes across country and state borders.

Most of the plastic leaving Chicago crosses the lake and ends up on Michigan beaches, Hittinger said.

Lake Michigan contains the greatest concentration of plastics in the Great Lakes and accounts for most of the data the model uses, Hoffman said.

It is possible that 80 percent, or more, of the plastic in the lakes sinks, Hoffman said. Much of it breaks down into smaller microplastics over time.

The researchers speculated that much of the plastic would float but the amount of plastic they expected to enter the lakes was significantly higher than what they estimated was actually on the surface, Hoffman said.

This prompted Hoffman and Hittinger to wonder where the plastic is going and how they can find it.

The model they developed only focuses on surface flow. Next they want to develop a three dimensional model, the researchers said.

“This work, we hope, can really contribute to all the other research about plastics in the Great Lakes,” Hittinger said. “This could give other researchers a geographic area to focus on and show them, how to focus or interpret their measurements.”