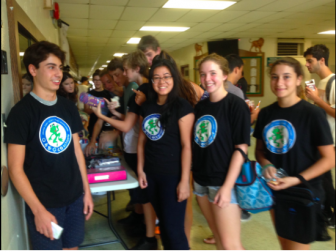 Average fourth-graders generate their weight in lunch room garbage annually, according to the Recycling Council of Ontario.

Bringing that number down is one of the environmental issues the province’s Back to School challenge is asking students to tackle this school year.

The initiative, championed by Minister of Environment and Climate Change Catherine McKenna, is a set of 10 eco-friendly ideas that students and parents can follow to reduce their eco-footprints.

The campaign has its own hashtag, #back2schoolchallenge, to promote the cause. McKenna tweets green suggestions daily to nearly 52,000 followers.

For example, she suggests packing meals in mason jars and using metal cutlery instead of plastic utensils.

Disposable items like paper sacks, plastic spoons and sandwich baggies account for nearly 66 pounds of trash disposed in the typical cafeteria every year. 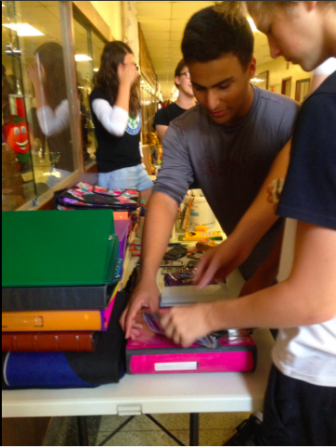 School supplies given out at lunch time at a school in Leamington Ontario school. Image: Lisa Jeffery

Kayla Kalalian, the Simcoe County school district environmental systems coordinator, is using Twitter to participate in the challenge. And she plans to promote lunchbox waste reduction in the newsletter of her school district, which is located in southern Ontario. “We encourage people to at least opt for recyclable products at a minimum,” Kalalian said.

Reusing old school supplies is another target of the back to school challenge. Using old products one more time can help students be green and their parents save some green.

The average Canadian family spends $323 USD ($428 Canadian dollars) in preparation for the new school year, according to 2013 poll data from Pollara, a market research company. The purchases include items as diverse as new laptops, pencils, and paper.

“We want our kids to really think about whether they need something or if they can make do with what they have,” Jeffery said.

“The whole idea is to have students bring in stuff to prevent them from throwing it out,” said Ecoteam member Tam Do. “At lunch, a bunch of students would come and we would give it out for free.”

Some of the beneficiaries were Syrian refugees.

“They don’t speak English and they have nothing,” Jeffery said. “We were able to provide them with stuff for the new school year.”

The drive is just one success story of many more that the back to school campaign aims to achieve.

For the participants of the challenge, making a difference means making changes that start with their own actions.

“This generation of kids … they are seeing the problems around them, and they don’t just want to talk about it in class,” said Jeffery. “They want to take action, and that’s what they did.”