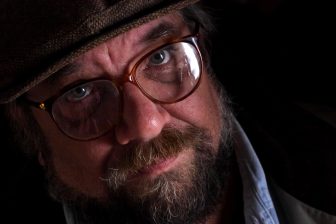 Michael Schumacher was born and raised in Wisconsin and has been living right by the shore of Lake Michigan all of his life.

“The lake means a lot to me so I won’t take it for granted, ever,” said Schumacher, 62. “I tried to read a lot of the history, learn as much as I can. The more I can learn the better, and I’ve learned the five Great Lakes have separate personalities; they’re all different in their own way.”

He should know. Schumacher recently wrote Torn in Two: The Sinking of the Daniel J. Morrell and One Man’s Survival on the Open Sea. It is his thirteenth published book, and the fourth in his series on Great Lakes shipwrecks.

“Every one of my shipwreck books seems to have a theme,” Schumacher said. “The Mighty Fitz is like a mystery. My second book Wreck of the Carl D. is a book about a city, this little tiny town in Michigan, and how it was impacted by the loss of this huge carrier. The third book is about a storm, a hurricane that hit the Great Lakes.

“And now this book is about a survivor, and there’s something a little bit different about each one that attracted me to each story.

“It’s just an incredible story about one man’s ability to survive in conditions that had killed everyone else.”

That man is Dennis Hale, a sailor who survives the shipwreck, survives on a raft in the middle of a November storm wearing only a coat and boxer shorts and survives deep guilt as the only person to make it out of the wreck alive.

The reader will learn the price you pay for living instead of dying, Schumacher said.

Readers will also learn about the dynamics of shipbuilding and the coal industry in the Great Lakes area in the 1960s and about the Coast Guard’s attempts to figure out what happened to the Daniel J. Morrell. 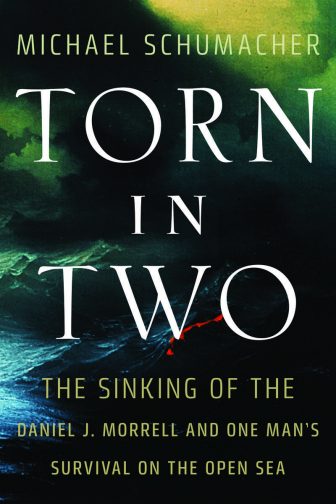 This is by no means a fluffy, empty novel. Schumacher provides depth and reality to the story that he tempers with engaging writing. It’s the 50-year anniversary of the tragedy and Schumacher does a great job paying homage to the ship and its crew.

“Fortunately we talked, but it would have been interesting to me to see how he would have reacted to the book when it came out,” Schumacher said. “I think he would have liked it.”

Torn in Two isn’t the first time Schumacher has written about the Daniel J. Morrell. He’s written the narratives of 25 documentaries on the Great Lakes, including one on the Morrell.  He regrets not asking Hale about his family.

“It’s so funny because you kind of forget about the process of discovery when you’re in my position,” said Schumacher. “Dennis had a difficult life, his mother died when he was young, his father couldn’t handle raising him and his relatives really wanted nothing to do with him. I would have loved to hear his complete explanation of what it meant to him to be part of a crew, and so I feel more for what I didn’t have than for what I learnt.”

Schumacher is working on a new book and editing another, though neither is about the Great Lakes.

That doesn’t mean there aren’t more shipwreck tales to tell, he said. There are thousands of shipwrecks in the Great Lakes, he said, but it will be a few years before he starts writing about another.

Schumacher and University of Minnesota Press’s Torn in Two: The Sinking of the Daniel J. Morrell and One Man’s Survival on the Open Sea is available in hardcover for $25.95 on Amazon, along with his other books about shipwrecks.