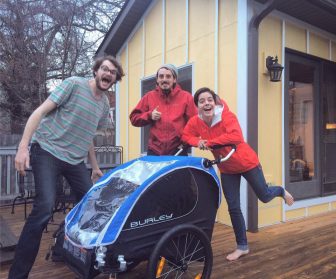 Three college buddies are packing up a baby stroller and running around Lake Superior.

The crew met in 2009 at Northland College in Ashland, Wisconsin. Evan Flom and Allissa Stutte met running on the school’s cross country team. They met Andy Butter, the third member of the team, soon after. They call themselves Our Shores.

The triad starts their journey May 20 in Ashland. They’ll make their way clockwise through Northwest Wisconsin and across the north shore of the lake in Minnesota and Canada and return by crossing Michigan’s Upper Peninsula.

They will run around 20 miles a day until August. They plan to take turns pushing the Burley Encore stroller that will hold “typical backcountry meals” and camping equipment. They will do their best to stay together, running and walking with each other, Flom said. 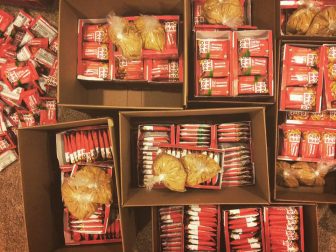 Boxes of granola bars will get the team through the summer.   Image: Our Shores

Dried hummus mix, pasta and nutrient rich energy bars will be supplemented with fresh fruits and veggies to keep the team running straight. Perishable foods will be bought every 3-4 days at grocery stores along the way.

Stacy Craig, the coordinator of Applied Learning at Northland College, got to know Butter, Flom and Stutte when they were students, but have stayed in touch since their graduations in 2013 and 2014.

“I worked with all of them on internships and other applied learning opportunities, so it’s been very rewarding to reconnect with them for this expedition,” she said.

Craig assisted Our Shores with fundraising and networking support when the idea was first envisioned.

The runners are great communicators and received vigorous outdoor training during their time at school, she said.

“At Northland College, all students are required to attend an outdoor orientation trip. Evan, Andy and Alissa all became leaders for this program,” she said.

The school’s close proximity to Lake Superior made a lasting impact on the group and inspired their new endeavor, Flom said.

“I think the most important thing they may have gotten from their time at Northland is a deep love for the Lake Superior basin and a desire to want to be an engaged citizen and steward of the watershed,” Craig said.

Although the 1,300-mile run will be a feat all its own, Our Shores hope to explore the many community organizations that work to protect the Great Lakes human and wild ecology.

The team plans on running five days a week, which will allow time for interviews and tours in each town they stop for rest, he said.

Our Shores’ blog has already tracked the planning of the ultra run and will continue to be a platform for logging their progress. An ultra run is the next step up from a marathon, or any consecutive jog greater than 30 miles.

Along with community interviews, the group has partnered with Adventurers and Scientists for Conservation to study the effects of microplastics in Lake Superior.

The conservation group pairs ultra runners and hikers with research projects. The adventurers can get to places where scientists can’t and collect data that would otherwise be unreachable, according to the group’s website.

The group reached out to Adventurers and Scientists for Conservation early in their planning.

Little plastic beads called nurdles have plagued Lake Superior shores since a train derailment spilled them in 2008. Scientists are unsure of the plastic’s effect on wildlife. 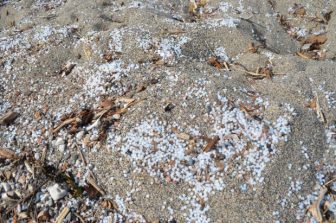 Researchers have collected some water samples, but are missing data from chunks of shoreline. The ultra team will bottle a liter of water before each stop and ship them out when they reach the next city.

“We are hoping to complete the chain,” said Flom.

This citizen science project is reflective of the good that Flom and his friends hope to bring to Lake Superior through their experience.

“By telling the story of Lake Superior and its people we also hope to foster an understanding of its significance and a greater love and appreciation for its beauty,” the team recently posted on its blog.

The blog, called UltraRun for the Love of the Lake, is an artistic and educational outlet for the team. Photo essays, video, poetry and other written word will showcase their circumnavigation of Lake Superior.

“We all have a shared story of our life on the lake, but we also have our own intense personal experiences with the lake,” Flom said.

After leaving Northland College, Flom, Stutte and Butter yearned for another experience on the lake while also giving back to the land that they love, Flom said.

The team’s fundraising goal is $7,500. Donations are still accepted. Extra funds will be allocated towards  community and environmental organizations they meet along the way.

You can donate here.