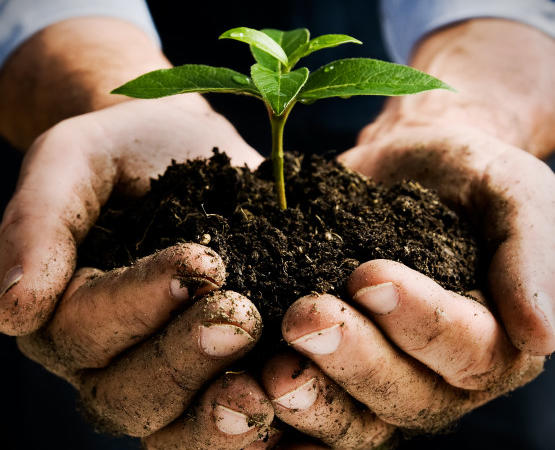 Lower sulfur dioxide and nitrogen oxide emissions have given time for acidic soils to get back on track.
Image: standford.edu

U.S and Canadian efforts to reduce acid rain that were started in the 1990’s are finally paying off today.

“The ecosystem is getting back on track,” said Gregory Lawrence, a scientist who has studied the effects of acid rain on forest and aquatic systems for the U.S. Geological Survey since 1990. When he began, Congress had just started regulating acid rain as an offshoot of the 1990 Clean Air Act.

The program capped the amount of sulfur dioxide and nitrogen oxide that could be emitted by U.S. power plants. That has cut emissions in half since 1990, according to the Environmental Protection Agency.

The recovery of the soil has lagged behind the air improvements, but Lawrence’s recent study — which includes one site in New York and eight in Ontario – has documented that it is getting better.

Acid rain happens when byproducts from burning fossil fuels mix with water and fall to the ground as sulfuric and nitric acids, according to the National Atmospheric Deposition Program.

It acidifies soils and depletes them of calcium, an essential nutrient. Without it, toxic aluminum surfaces and wreaks havoc, said Lawrence said. Acid rain harms plants and kills fish.

Despite several decades of declining acid rain, previous studies indicated that soils continued to get more acidic, especially harming sugar maples and red spruce trees, he said. These studies used data that only extended up to 2004.

But Lawrence’s study, which uses data from as recent as 2014, shows that the ground is no longer depleted of calcium, and toxic aluminum has decreased dramatically. 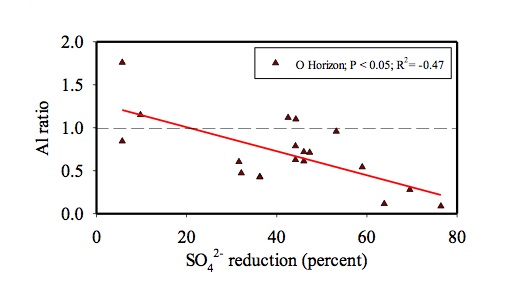 Figure shows the decline of harmful aluminum in soil (expressed as a ratio of recent values to past values) as the reduction in atmospheric deposition of sulfate increases.
Image: Greg Lawrence

A quarter century after emissions were limited, soils have finally stopped acidifying, according to the study Lawrence and a team of scientists published in the journal Environment Science and Technology.

“Lakes can support fish that had never been able to before,” Lawrence said.

Limiting chemical emissions has continued to be a challenge since the Clean Water Act, but is necessary to keep ecological systems stable, Lawrence said.

Without it, acid deposition would still be destroying terrestrial ecosystems, Lawrence said.

“There is a challenge of dealing with environmental protection in the United States. We need to think about how air quality affects water quality,” said Michael Murray, staff scientist at National Wildlife Federation’s Great Lakes office.

Now the challenge has shifted to greenhouse gases, said Bill Becker, the executive director of the National Association of Clean Air Agencies.

“It’s partly an issue of implementation of the rules under the Clean Water Act,” sometimes we have to go back and add additional implementations of the law, Murray said.

Critics of climate change often derail Congressional proposals to fight global warming, Becker said. “We don’t have the luxury of waiting for Congress.”

Lingering effects of acid rain and current carbon emissions are still messing with soil composition. As soil acidity returns to natural levels, scientists are unsure of the soil’s capacity to replenish calcium levels.

“We don’t know for sure what the soil was like in the 60s,” Lawrence said. We can infer a little bit here and there.”

Lawrence says when his research team at the University of Maine artificially inserted lime in soil, it reacted very well. The more calcium from the lime and the less carbon emissions, the healthier the environment.

[The study shows] that changes seem to be positive” and are “definitely encouraging in showing that soils are recovering, as result of the Clean Air Act,” Murray said.

International efforts to reduce global carbon emissions have seen success in the past, and ongoing negotiations are meant to quantify these successes, Becker said. But, it is also important to continue to advocate for lowered carbon emissions in the states.

“There’s still improvements that can be had,” Murray said. You can get multiple benefits from focusing on clean air,” Murray said.