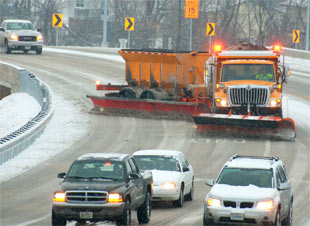 The county’s oldest snow plows are from the 1970s and have over a quarter million miles on them, said Gregg Patrick, Keweenaw County Road Commission engineer.

“Most county commissions are running their equipment twice the life they used to, and these can start to fail in the winter season,” Patrick said.

Counties have trouble keeping roads safe and convenient for the public when their old equipment is failing and needs maintenance more often, said Ed Noyola, deputy director of the County Road Association of Michigan.

“Its reliability factor goes down as the vehicle ages beyond its intended life,” Noyola said, “What used to take us a day is now taking us two and a half days or longer in certain communities.”

Rep. Scott Dianda, D-Calumet, is reintroducing a bill to give counties like Keweenaw an opportunity to get affordable snow plows by giving local entities the first bid on equipment that the Michigan Department of Transportation (MDOT) is auctioning off.

If Dianda’s bill passes, all auctioned-off equipment will be available for bidding by local cities or counties only for the first five days, before opening to the general public, according to Dianda.

Currently, the State Surplus Office posts these vehicles on its online auction website for anyone to bid on, and vehicles go to the highest bidder, according to Carrie Rambo, state surplus supervisor at the Michigan Department of Technology, Management and Budget.

Both local governments and private companies bid on this equipment, Rambo said.

MDOT auctioned off 22 winter maintenance trucks in 2013 and 14 in 2014, according to Jeff Cranson, MDOT director of communications.

MDOT trucks ideally are retained for only 10 years, but due to budget cuts are often used by the state for longer before they are auctioned off, according to Cranson.

The price of these used vehicles depends on condition and ranges from $2,000 to over $30,000, Cranson said.

“Sometimes these 12-year-old vehicles are still in great shape and the counties really need them,” Dianda said.

Counties must plow city streets with steep hills and sharp turns that put more wear on a vehicle than the state highways put on state plows, according to Eric Waara, Houghton City manager.

All representatives voted for the bill when it passed through the House last year, but it was never picked up by the Senate, most likely because it was not a high priority at the time, according to Dianda’s office.

“This time around I am calling on the governor and the Senate to finish the job,” Dianda said in a press release.

Patrick said counties like his are unable to buy new snow plows because materials costs have risen but funding from the Michigan Transportation Fund has not.

“The funding we are receiving right now is the same as it was in 2000,” Patrick said, adding that “diesel fuel, tires and asphalt have all gone up 200 to 400 percent in that time.”

“We are holding our own, but each year it gets a little tougher,” Patrick said.

It will still be challenging to get all counties the equipment they need with this new bidding process, as counties with the least money might often be outbidded by others, Noyola said.

Patrick said even though only one county will win each auctioned vehicle, the bill still gives all counties a chance at gaining this equipment.

“We are looking forward to any funding increase we can get or any other avenues we can get equipment from,” Patrick said.