Local, state, federal and non-governmental organizations are joining forces to help restore the St. Louis River Estuary (SLRE) since it was listed as an Area of Concern in 1989.

Although at first glance it may not seem like it, the SLRE has suffered some major environmental problems since the 1800s and collaborative efforts are being made to clean up the mess.

First, it’s important to understand what an estuary is. Daryl Peterson, the senior project manager at Minnesota Land Trust, described an estuary as an area where a river meets a large body of water. Estuaries maintain an exchange of water and nutrients, which is critical to the wildlife that inhabit the area. The St. Louis River Estuary is a 12,000 acre freshwater wetland; it is the largest of its kind, creating a unique ecosystem.

In its natural state, the SLRE could support many different species of wildlife including migratory birds, such as the raptors observed migrating over Hawk Ridge every fall, to the fish swimming in its waters. 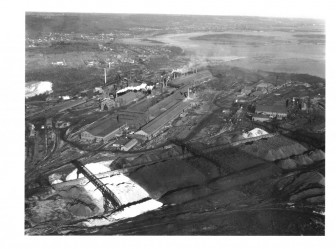 The U.S. Steel plant located along the SLRE in the year 1950. Photo: Diane Desotelle.

In the 1800s people began destroying and shaping the landscape to accommodate shipping traffic, as well as to construct the largest industrial port on the Great Lakes.

Peterson said trees were cut down, which led to more run-off. Dredging and filling the shoreline created straight land for the harbor, dams were created, and waste from industrial companies was dumped straight into the water.

“Back then people used to recreate on the harbor side of the estuary, but the water quality got so bad that people had to stop using it,” Peterson said. “By the 1920s people began to document major fish die-offs.”

The SLRE had deteriorated rapidly.

There was a series of legislative actions that lead to new efforts to help improve and maintain the quality of water.  When the U.S. Environmental Protection Agency established the Clean Water Act and the Great Lakes Water Quality Agreement, Peterson considered it a landmark. 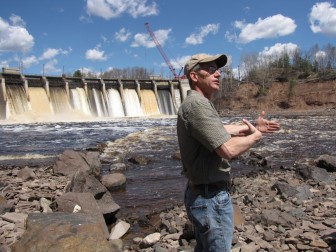 The GLWQA was an agreement between the U.S. and Canada that required both governments to regulate and reduce the amount of contaminants and pollutants being released into the Great Lakes. The agreement also required the governments to work towards reversing and restoring the Great Lakes ecosystems that had been deteriorating from the industrial pollution. These pollutants are referred to “legacy” pollutants, which refer to pollution that occurred from the start of people settling in the area until 1950.

Once the GLWQA was implemented, water quality did improve. However, in 1978, the agreement was revisited and amended to better address toxic pollutants that had been identified since work began.

In 1987, the GLWQA was once again revisited and amended. This time, a key concept was developed to help with the planning and implementation of dealing with the degraded ecosystem. The concept is called “Areas of Concern” and 43 were identified throughout the Great Lakes region. 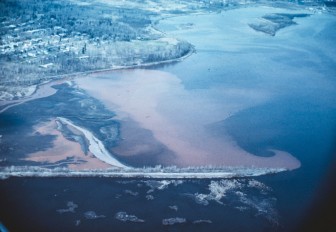 This photo shows contaminated water in the SLRE from the dumping of pollutants into the water. Photo: Diane Desotelle.

The ultimate goal is to “delist” each AOC through detailed planning and implementation. Today, there are still 38 of the 43 AOCs left to be delisted, including SLRE.

In order to address these AOC, the 1987 amendment set forth a process known as Remedial Action Plans. RAPs are being used to help put together a plan of attack to delist AOC.

The U.S. EPA assigned the Minnesota Pollution Control Agency and the Wisconsin Department of Natural Resources as the “regulatory agencies” that will address AOCs in their states. The MPCA and WDNR and many other agencies, including the Fond du Lac Tribe, are collaboratively working to restore the SLRE.

Diane Desotelle, the MPCA St. Louis River AOC coordinator, said that planning is very important when it comes delisting such a large ecosystem. 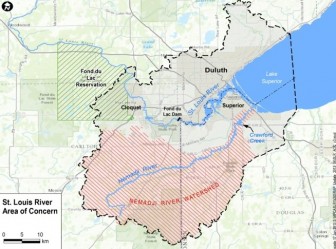 A diagram of the St. Louis River AOC from the current RAP. Photo: Diane Desotelle.

“You have to be realistic when you’re planning a project like this. Everyone wants everything done, but you have to realize that’s not a realistic goal,” Desotelle said. “It’s important to be able [to] identify the problem, plan actions and follow through to reach the goals you set to achieve.”

Desotelle mentioned that it can be difficult to establish the scope or the extent that an area should be cleaned up. It can also be difficult to measure the level of which an area has been improved. “Metrics” are used to help measure the progress of contaminated sites. One metric that both Desotelle and Peterson discussed is the health of the benthos layer in the sediment.

Benthos refers to the bugs that live in top three feet of sediment. These bugs are an indicator of the health of an ecosystem, since they inhabit sediments that generally withhold contaminants.

“We will monitor the invertebrates abundance, then we expect other wildlife that depend on these invertebrates to return as abundance increases. It’s kind of a if you build it they will come approach,” Peterson said.

There are two ways to help improve degraded ecosystems: remediation and restoration. According to Desotelle, remediation is the process of cleaning up sediments that present a health risk to humans and wildlife by capping or removing it. Restoration involves returning a habitat to its natural state.

Within each AOC, the concept of Beneficial Use Impairments were identified. BUIs are, “issues that limit the use of the river by humans and wildlife,” according to the 2013 progress report. Each BUI identifies specific issues that are used as targets to help resolve the problems in the SLRE.

Soil is being dredged and moved to 21st Ave. West as a way to observe how moving sediment could help remediate or restore different areas along the SLRE.

There are a total of 14 BUIs that are recognized by the GLWQA, and nine were identified in the St. Louis River AOC.

As an example of how a BUI looks, the 2013 progress report defines BUI 1, out of the nine for the St. Louis River AOC, as: 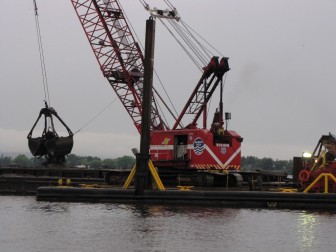 Soil is being dredged and moved to 21st Ave. West as a way to observe how moving sediment could help remediate or restore different areas along the SLRE. Photo: Diane Desotelle.

“Restriction of Fish Consumption: Contaminant levels in fish exceed state standards for mercury and polychlorinated biphenyls in Minnesota and Wisconsin at levels greater then other areas due to legacy contaminants.”

Desotelle is optimistic that the St. Louis River AOC will be delisted the set deadline.

“At first the resources weren’t there, but now the U.S. EPA has made this a priority and is committed to restoring the environment.” Desotelle said. “The staffing and money is available and we are getting great support from both the state and federal government.”

For more background information on the planning and implementation, as well as the current work being done on the delisting of the St. Louis River AOC, here are a few resources:

One thought on “St. Louis River Estuary restoration: Cleaning up the past”