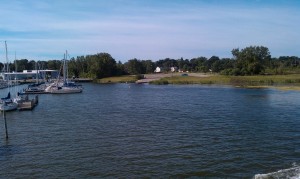 Muskegon Lake in the wake of a shoreline restoration project. According to the Michigan Department of Environmental Quality, the lake should be delisted as an Area of Concern within 4 to 5 years. Photo by Kathy Evans.

Cleanup efforts at two Michigan Areas of Concern, Muskegon Lake and White Lake, have reached important milestones, according to the Michigan Office of the Great Lakes.

The Environmental Protection Agency on Feb. 26 lifted Beneficial Use Impairments on both lakes pertaining to fish consumption, allowing local residents and anglers to fish these lakes with fewer restrictions.

Recent studies by Grand Valley State University on the lakes revealed that fish there did not possess higher concentrations of PCBs or mercury than fish in lakes that were not listed as Areas of Concern. Both lakes remain subject to the same fish consumption advisories as the other lakes in the area.

Beneficial Use Impairments, which are put in place if there is a degradation in the chemical, physical or biological integrity of a Great Lakes ecosystem, were placed on these lakes as a result of the discharge of pollutants from industrial facilities located within the lakes’ watersheds, according to Stephanie Swart, the Area of Concern coordinator for Muskegon Lake with the Michigan Department of Environmental Quality.

“Essentially, it means that something is happening in the system such that we see an issue,” Swart said. “In this case the issue was fish consumption. People could not catch and eat the fish, and it had been like that for some time.”

The U.S.-Canada Great Lakes Water Quality Agreement establishes 43 Areas of Concern across the Great Lakes region that have experienced environmental degradation such that their ability to support aquatic life is threatened. Cleanup plans were developed for each site. The two areas removed from the list are the Oswego River in New York in 2006, and Presque Isle Bay in Pennsylvania in Feb. 2013.

The lifting of these restrictions on Muskegon and White lakes came after 15 years of cleanup at both sites. According to Swart, both lakes are on their way to being fully removed from the Michigan Areas of Concern list.

“White Lake should be removed in the next year or two,” Swart said, “Muskegon is probably four to five years down the road yet.”

Both lakes remain under several other Beneficial Use Impairments that must be lifted before they can be delisted as Areas of Concern. Muskegon Lake is still subject to beach closings, threats to fish and wildlife, degraded aesthetics and undesirable algae. White Lake also struggles with fish and wildlife issues and restrictions on drinking water.