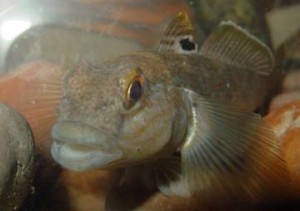 An uninvited outsider is rapidly showing up in new freshwater territory in Wisconsin–and a recent scientific study indicates the increasing impact of the small fish.

Researchers at the University of Wisconsin Center for Limnology found the invasive round goby has increased 10-fold in some of the state’s lakes and rivers.

In addition to the Great Lakes, the fish are now showing up in 175 miles of inland streams, according to Matthew Kornis, doctoral candidate at the Center for Limnology.

Like many of the known invasive species inhibiting the Great Lakes, the round goby arrived by an ocean-bound ship and was first seen in the Saint Clair River in 1990.

“The study,” Kornis says, “raises significant concern of negative effects round gobies will have or already have on Great Lakes tributaries.”

Researchers found a related dramatic decline in native fish in places where gobies thrive. They attributed the drop to gobies eating the eggs and larvae of native fish.

Gobies can spread contaminants such as mercury and botulism, Kornis said.

The researchers said the key to control is educating the public on the negative consequences of the fish, who then can take the proper steps to slow the invasion.

Such steps include cleaning off boats in between uses on different bodies of water, Kornis said.

And anglers should not use gobies as bait which also can lead to their spread.

That’s probably better advice than the technique I used as a kid when I caught gobies while fishing at my grandma’s house on Lake St. Clair:  We would toss them into the street for oncoming traffic to squash.

For more on the study of Kornis and his colleagues, watch this video by the University of Wisconsin Sea Grant Institute.