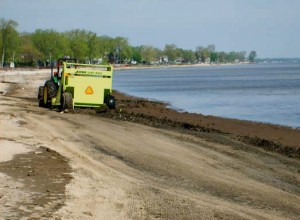 Michigan lakefront property owners who want to weed their Great Lakes beaches with mechanical devices may soon have one less hurdle to jump.

Gov. Rick Snyder is expected to soon sign a bill that will do away with state permits for grooming many Great Lakes beaches.

The state will continue to regulate beach grooming in environmentally sensitive areas. And everyone still needs a permit from the federal U.S. Army Corps of Engineers.

In 2007 Michigan lawmakers made it illegal for beach owners to clean their properties, beyond general maintenance, without applying for state and federal permits. Since then, beach owners have been fighting to repeal the law. General maintenance is considered raking or hand pulling vegetation. To use mechanical devices you need a permit.

“We talk about Pure Michigan, but if we can’t clean our beaches it won’t be safe for anyone to walk,” said Ernie Krygier, president of Save Our Shoreline —the group pushing the bill.

Michigan is the only state requiring both state and federal permits for grooming Great Lakes beaches. In Wisconsin a state permit is required to use mechanical grooming devices. Most Great Lakes states have state guidelines about removing vegetation.

Many Michigan beach owners believe they should have the right to clean their property without a permit — let alone two permits.

The change in the law was a long time coming for bill sponsor Sen. Tom Casperson, R-Escanaba, who has been following this issue for years. “I was dealing with it based on what I was getting from the beach owners in my district,” said Casperson, who serves 13 of the 15 counties in the Upper Peninsula. “They have been cleaning their beaches for years, and all of a sudden the rules changed and they couldn’t get any answers.”

His constituents were frustrated by having both state and federal officials unable to declare a high water mark, requiring them to hire a water expert instead. The high water mark is what separates the property owner’s land from government land— which is important for establishing property size and market value.

“I could see everyone rolling their eyes thinking, you got to be kidding me.” Casperson said.

Still, even with both state and federal requirements, only four permits were denied since 2007, according to the Michigan Department of Environmental Quality. About 500 permits have been approved since then. 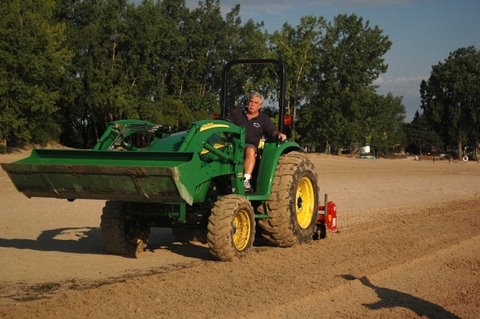 Ernie Krygier using his tractor to clean up the beach. Photo: Baycounty-mi.gov.

“There are 3,200 miles of shoreline and there are certainly more than 500 people who live there,” he said.

Though, that’s if you include inland lakes, which don’t apply to the grooming legislation.

Such few permits issued since 2007 likely means that most people quietly groom their beaches and avoid the permits all together, Krygier said.

Though federal officials will continue to regulate beach grooming, some environmental groups worry that the change will confuse people about whether a federal permit is still needed.

“People might hear that this was signed and think that they won’t need a permit at all, but that isn’t the case,” said James Clift, policy director at the Michigan Environmental Council, a coalition of state environmental organizations.

Or perhaps people aware that they need a permit may continue to maintain their beach without one. 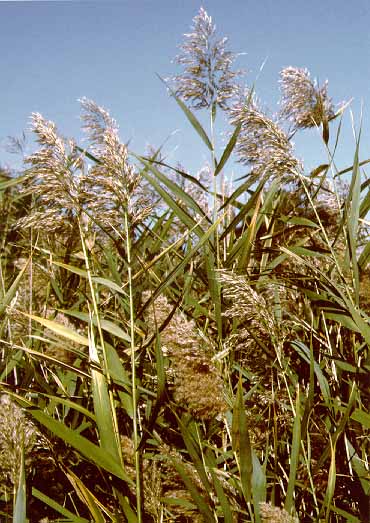 Phragmites are a grass like invasive species that can grow to a height of 10 ft. Photo: Nps.gov.

The right to remove invasive species like phragmites is a large issue on both sides of the argument. Many people want a permit to get rid of them. But improper phragmites removal could worsen the invasion of the plant that chokes wetlands and shorelines.

“The worst thing you can do is start chopping out phragmites,” said Sarah U’Ren, program director at the Watershed Center Grand Traverse Bay, Mich. “If you chop it, any root system you have will start growing back. That’s not the way to treat invasive species. You have to treat it properly.”

A question in this debate was whether personal property rights should outweigh the need to protect Great Lakes ecosystems.

“Not all of the Great Lakes are meant to have a sandy shoreline,” U’Ren said. “The vegetation functions in a number of different ways.”

The adverse environmental impact of beach grooming is undeniable, according to a study by the Michigan Department of Environmental Quality. It reports that there is less aquatic life and more ecosystem degradation around maintained beaches.

The Great Lakes support nearly 200 species of fish, 90 percent of which use coastal marshes at some point, according to the study.

“I don’t get why the state would give up its right to regulate its own shoreline.” U’Ren said.