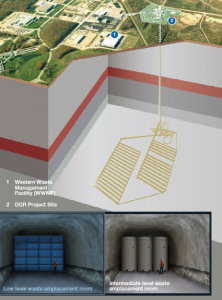 A proposal to store nuclear waste below the Canadian shore of Lake Huron has drawn high criticism from environmental advocates.

The storage facilities would be built 2,230 feet below the ground and about mile away from Lake Huron near Kincardine and on the site of the Bruce nuclear power plant.  It would hold about 200,000 cubic meters of waste.

“Low level radioactive waste consists of industrial items that have become contaminated during routine clean up and maintenance activities at nuclear generating stations.”

The Canadian Nuclear Safety Commission and the Canadian Ministry of the Environment created the Joint Review Panel to conduct hearings and discussions on the environmental impacts of the project.

It will consider the effectiveness of engineered and geological barriers and the reliability of computer modeling of safety predictions.

“We do believe it is a safe project,” said Scott Berry, spokesperson at the Ontario Power Generation. “The proposal is based on several years of technical and environmental assessment reviews by our company, international experts and local municipal agencies.”

The idea for the permanent storage of the waste came from Kincardine officials, said Berry.

Such waste is now temporarily stored above the ground at the Bruce nuclear plant site in Kincardine.

Supporters say the concept relies on multiple natural barriers, combining engineered containers and the rock formation to safely store the waste while the radioactivity decreases.

“We chose the site because it has a stable rock formation of over 450 million years. It is extremely dense and we expect it to remain like that for another million years,” Berry said.

But opponents argue that eventually the waste might escape the repository.

Kay Cumbow, spokesperson for the Blue Water Sierra Club, a Michigan-based environmental protection group, said there could be safety hazards. 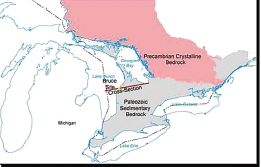 “This dump could eventually leak into groundwater and Lake Huron,” said Cumbow. “If that happens these wastes could then contaminate drinking water, fisheries and aquatic life and ruin tourism for many communities who depend on the fresh waters from Lake Huron and downstream.”

The threat is long-term, she said.

“Earthquakes, or perhaps other future unexpected natural or technical disasters, centuries from now could also result in release from the site.”

Cumbow noted that some radioactive substances are very long lived, and that the threat will last for many thousands of years. The waste must be isolated from the food chain for as long as it is hazardous, she said.   That is difficult to guarantee, especially since the containers for high-level waste are only guaranteed for 100 years, she said.

According Ontario Power Generation the radioactivity in the low —level waste will decay within about 300-400 years but the intermediate—level radioactivity will remain thousands of years.

Brennain Lloyd, project coordinator at Northwatch, a coalition of environmental and citizen organizations in Ontario, agrees with Cumbow.

“It could serve as a dangerous precedent, becoming the poster child for other nuclear waste burial schemes,” Lloyd said.

OPG said the site has the lowest earthquake frequency in North American continent and there are several examples of such facilities operating safely in the United States, Finland and Sweden.

The Joint Review Panel is collecting public comments on the project until August but it most likely will extend, said Berry.

“We suppose the hearings will start sometime at the beginning of 2013.”

Saodat Asanova contributed to this report