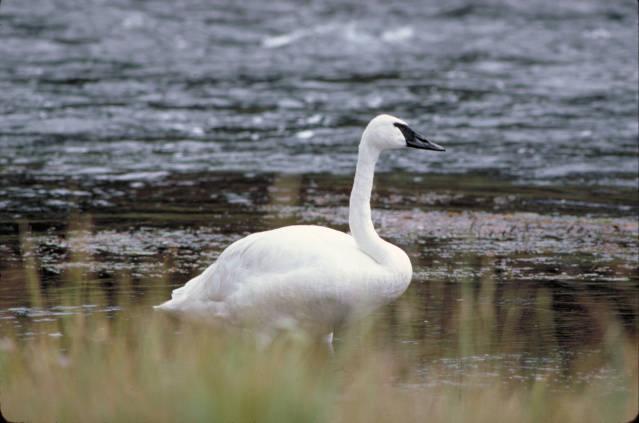 About 8,000 trumpeter swans are expected to be the results of a 2010 survey. Credit: Dr. Thomas G. Barnes/USFWS

It’s time to break out the brass band because trumpeter swans are back.

Standing up to 4-feet tall with up to an 8-foot wingspan, trumpeter swans are the largest waterfowl in North America. Their Great Lakes range includes: Minnesota, Wisconsin, Michigan, Ohio, New York and Ontario.

Early settlers hunted these birds nearly to extinction in the 1800s — using them to make powder puffs and feathered hats. But lack of exact records makes it impossible to guess the original population.

But trumpeter swans are back.

But that’s just an estimate, he said.

The heart of the population is in the Great Lakes states, Ontario and Iowa, Johnson said.

And it varies dramatically from state to state.

A Minnesota aerial survey in early January tallied more than 5,000 birds in that state. By taking migrating birds into account, experts put the actual trumpeter number at nearly 6,000.

In 1973, a swan restoration program started at Minnesota’s Three Rivers Park District with five swans. Later, eggs were taken from Alaska’s booming trumpeter swan population. These eggs hatched and the cygnets —young birds — were raised and released in Minnesota and other Great Lakes states.

At this point, we no longer bring eggs from Alaska or release birds, Gillette said.

They don’t do this in Ohio either, even though the bird has  been listed by the state as endangered since 1996.

There are about 150 to 200 trumpeters in Ohio, including – 30 nesting pairs, said Dave Sherman, a wildlife biologist with that state’s division of wildlife.

Ohio started swan restoration in the late 1990s long after other states like Minnesota. But there’s another reason their populations may be so different: the presence of wetlands –the habitat trumpeters prefer.

Ohio has lost 90 percent of its wetlands, he said, which limits the swans that usually like large territories to themselves.

“We found that the birds are fairly adaptable and we’ve seen them in wetlands that are less than 20 acres, so they have adapted to the limited number of habitat that’s here in Ohio.”

Sherman is pleased with Ohio’s population, though he’d like to see 50 breeding pairs before it’s delisted.

But, Sherman doubts we’ll ever see numbers in the thousands. 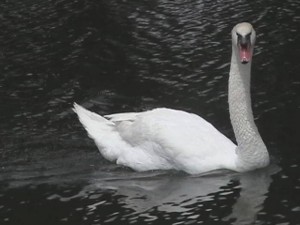 Some consider the invasive mute swan a threat to trumpeters. Credit: Sean Varner/USFWS

Lack of trumpeter habitat — mainly wetlands –  may not only be the threat to trumpeter swans.

Last week the Michigan Natural Resources Commission voted 3 to 2 to make it illegal to rehabilitate the invasive mute swan.

“Oh, we purposefully brought them here as an ornamental birds and they got away from us,” Johnson said.

The overpopulated invasive mutes compete with the trumpeter by taking up preferred nesting spots and bullying them.

“They’re a definitely a problem and we’re trying to minimized they’re impact on the trumpeter’s success,” Sherman said.

But Johnson has had other observations.

“My experience has been that the trumpeter swans dominate the mute swan,” Johnson said.In Michigan, Johnson said, trumpeters are purposefully released where no or few mute swans are present.

But Johnson admits that mute swans’ aggressive behavior can be a problem, especially for jet-skiers.

For those like Gillette, restoring the trumpeter swan back to the Great Lakes has been a life’s work.

He faced setbacks. Nine out of the 12 trumpeters first released were shot. In 1988, a drought lowered water levels and exposed lead bullets beneath the usual waterline. Many trumpeters died of lead poisoning.

He says the setbacks are worth it.

“Yeah it’s very gratifying,” he said. “It’s a heck of a commitment and basically a whole career.”

12 thoughts on “Great Lakes trumpeter swans are back”