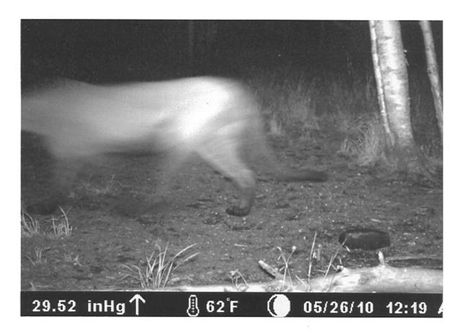 The Michigan Department of Natural Resources and Environment confirmed Monday that this headless blur of an animal is likely a cougar. Photo: Michigan DNRE

Whether cougars are prowling around Michigan and Ontario has been a small mystery. Michigan’s last known cougar was killed in 1906, and Ontario’s was shot in 1884.

But evidence that they’re back is piling up.

The Ontario Ministry of Natural Resources confirmed the cats are back after biologists checked out scat, tracks and DNA in a three-phase, four-year study, reports Raveena Aulakh for the Toronto Star.

The Michigan Department of Natural Resources and Environment recently released a trail camera photo of a vaguely feline blur in the Upper Peninsula. The state’s trained cougar team confirmed that the “characteristics of the animal are consistent with a cougar.”

None of this is news to the region’s cougar true believers. You can read stories of hundreds of unconfirmed cougar sightings in Michigan at SaveTheCougar.org.

4 thoughts on “Cougar country: Big cats confirmed in Ontario and likely in Michigan”