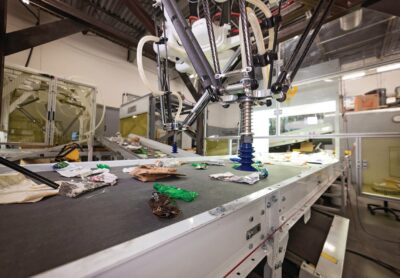 I sorted my first piece of someone else’s trash in January 2020.

I wanted a part-time job where I could learn something new. The position as a student recycling assistant at the Michigan State University Recycling Center looked to be the best fit.

My job was to stand at a conveyor belt and grab the recyclable waste zipping by. I quickly sorted crushed water bottles and shredded papers into classroom-size storage bins. I learned a lot about waste management during monotonous, repetitive four-hour shifts.  I would never want to line-sort as a career.

But there is an emerging new worker that could make a career out of sorting recyclables: robots.

One is coming to my old job site in East Lansing, Michigan, as a part of a growing trend of automating recycling in the Great Lakes basin.

The $250,000 robot will make sorting recyclables quicker and more efficient, said Dave Smith, the recycling coordinator for Michigan State University. It is a safer, cost-effective and reliable way to get an often-unwanted job done.

This machine, funded by the Michigan Department of Environment, Great Lakes and Energy, is not the first recycling robot in Michigan or in the Great Lakes region.

“The robots are like human sorters,” said Eric Camirand, founder and chief executive officer of Waste Robotics, “They have a camera for eyes, a computer for a brain and a suction cup for an arm.”

The eyes scan the sorting line for specific recyclables, like paper or water bottles, he said. When it sees a recyclable item, the brain recognizes it as recyclable, and the arm moves to pick up the item and remove it from the line.

Through cloud technology and machine learning, the robots can self-improve and share those improvements with other recycling robots. The more the robots sort, the more they learn what items are recyclable and the better they can teach other robots.

Some day they may even become smart enough to decide what current market prices make which items the most valuable to pick, Camirand said.

Robots will help fill a serious labor gap in sorting recyclables, he said. “The will to recycle is there, but the want to sort it is not.”

The newly installed robots are a major help at the Emmet County Materials Recovery Facility near Harbor Springs, Michigan.

“We have half the people working here but are producing 50% more bales per person,” said Andi Shepherd-Tolzdorf, who is the county’s Department of Public Works director. A bale is a car-sized brick of compressed recyclables that can weigh up to 3,000 pounds.

“The robots are actually helping the current workers do their job while increasing production,” she said.

Shepherd-Tolzdorf said the facility has struggled with employment for years, especially during the COVID-19 pandemic. The facility was redesigning its sorting line when the pandemic began. Safety hazards plus low employment make the robots a perfect choice to keep the sorting line running, she said.

Before 2018, most recyclables in the United States were sent to China for processing. After many years of receiving non-processable and contaminated materials from Western nations, China quit importing recyclables to control its waste intake and protect its environment.

The biggest challenge faced by recycling robots will be adopting new technology to the decades-old recycling centers in the Great Lakes. The Michigan State University recycling center where I worked could never become fully automated, Smith said.

“You would have to build a whole new facility for that,” he said.

Current recycling systems are not meant to run 24 hours, seven days a week like a robot can, Camirand said. The technologies used in these systems slow the robots and make them less efficient.

The Emmet County robots are still learning their jobs and are not fully autonomous. They help move the industry forward and get stuff sorted without people, said Kate Melby, the communications coordinator for the Department of Public Works.

But they are not perfect yet.

“We need the synergy of people and machines together,” she said.

Some experts say pulling people completely out of the equation makes us less aware of the waste we produce. I certainly would not be as knowledgeable about what we throw away without my time on the sorting line.

I sincerely value it. But we have a lot of waste to sort and not enough hands to do it.

Robots can be those needed hands.

One thought on “Pandemic, China trash-ban push recyclers to robots”