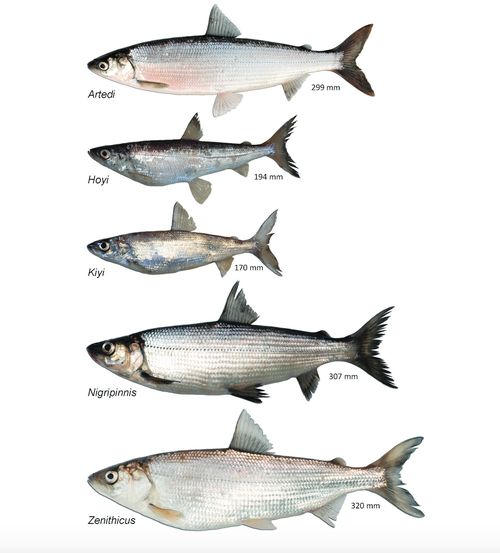 Ciscoes are considered by some in the fisheries community to be the “Rabbit of the fish world” because of their important role in the food web. Their reintroduction could spark comebacks for other species like lake trout. Image: Michigan State University College of Agriculture and Natural Resources

Once as many as nine types of ciscoes roamed the Great Lakes, playing a key role in the food web.

“Cisco are kinda like the rabbit of the fish world,” said Dave Fielder, a fisheries research biologist for the Michigan Department of Natural Resources. “A lot of predators depend on them and are driven and sustained by their numbers.”

In the mid-1900s the fish largely disappeared from the lower four Great Lakes due to overfishing, competition from invasive species and habitat changes caused by nearby factories, Fielder said.

Several conservation groups supporting Lake Huron are trying to bring them back. If successful, fishery managers with other Great Lakes could follow.

“I would think that the Lake Huron template of how we approached rehabilitation to be looked at by some of the other lakes,” said Chris Olds, a fish biologist with the Alpena Fish and Wildlife Conservation Office.

A cisco rehabilitation could ripple through the Great Lakes by strengthening the population of several other fish species.

“We have been, for 50 years, trying to restore lake trout in the Great Lakes without a ton of consideration for their primary forage, which (was) ciscoes,” said Andrew Muir, a science director for the Great Lakes Fisheries Commission.

The alewife, an invasive fish that entered the Great Lakes through canals, was a main cause of the ciscoes’ fall. They eat zooplankton, also a main food source for ciscoes. The competition crippled their population, Fielder said.

Alewives replaced ciscoes as a primary source of food for larger fish like walleye and lake trout, but not seamlessly.

Not only are alewives smaller than many species of ciscoes, providing less food for predators, they also have high levels of thiaminase, an enzyme that interferes with the reproduction of the fish that eat them, Fielder said.

Additionally, alewives spawn in the spring near the shore with perch, walleye and lake trout and eat the young of those species. Meanwhile, ciscoes spawn in the fall, offering less competition and predation to the spring spawning species, Fielder said.

In the early 2000s, alewives all but died out in Lake Huron, largely because of the stocking of Pacific salmon, a predator of the alewife, according to the Great Lakes Fisheries Commission.

The need for an alewife replacement started the conversation for reintroducing ciscoes, Fielder said.

“That niche is somewhat open,” he said. “That’s what really motivated us to see what we could do to promote cisco restoration.”

The cisco reintroduction movement is driven by a number of groups, including the Michigan Department of Natural Resources, the U.S. Geological Survey, the Fish and Wildlife Conservation Office, tribal partners and other Canadian partners.

In Lake Ontario, there is another project trying to restore a different type of cisco, the bloater.

“The communication that’s been going on is like none that I’ve ever seen,” Olds said.

The fish are stocked in the fall and spring and given marks on their vertebrae. The fall fish are given a different mark than the more mature spring fish. This way, scientists can identify which time of the year is more effective for stocking, Fielder said.

Collecting data is a team effort. Commercial and sport fishermen are asked to send pictures or bring in ciscoes caught on Lake Huron and report the location of the catch.

“People are looking, they’re keeping their eyes open,” Olds said. “They see something, they say something. That’s how we can make these programs successful.”

Other partners in the reintroduction effort analyze the stomachs of predators and come up with new ways to track the population. One method under exploration is sonar, Fielder said.

Over 750,000 artedi are stocked each year, but the number could grow to over a million, depending of mortality rates in fish hatcheries, Fielder said.

While that sounds like a lot of fish, stocking is always an uphill battle.

“Anytime you are stocking fish it is understood there will be a great deal of predation,” Fielder said. He estimates that 95% of the artedi could be lost to predators within the first few months.

“So far we’re seeing some positive signs that it might be working,” Olds said. Success is determined by the reproduction of surviving fish. Fish managers will get a better indication of early success in the fall when the first batch of artedi should be returning.

“The real test will be when we can see if they are returning and homing and spawning,” Fielder said.

The artedi are stocked in the Saginaw Bay, historically one of the most popular spawning locations for the species, Fielder said.

The effort could help yellow perch in Saginaw Bay.

“Cisco are probably a buffer on [perch],” Fielder said. “Predators would eat the cisco instead of the yellow perch.”

While there is optimism about the return of the artedi, a resurrection of other ciscoes that were once abundant isn’t likely soon, Muir said.

A U.S. Geological Survey study showed that kiyi, a deep-water cisco that thrives below 200 meters, could be reintroduced to many of the areas in the Great Lakes where it died out in.

But even with this information, we don’t have the resources to reintroduce kiyi, Muir said.

Since they are deep water fish, which are harder to capture, and there aren’t many of them left, it would be a challenge to gather enough kiyi fish and eggs to start a reintroduction program, Muir said.

Muir said this could change if a way to raise these fish in hatcheries and introduce them into deep water emerges.

“I think there’s definitely opportunity there, I just don’t think we yet have the science to understand how we might go about rearing and culturing these animals and then reintroducing them into deep water.”

One thought on “Fixing the food web: Cisco reintroduction to the Great Lakes could have enormous ripple effect”