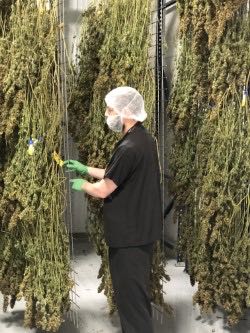 Michigan regulators are preparing for the environmental impact of the state’s recent legalization of recreational marijuana.

Associated with this expanding production are environmental concerns related to water and air quality, said Jill Greenberg, public information officer with the Michigan Department of Environment, Great Lakes and Energy.

“The way the ballot was written, there was no consideration for environmental impact, it all had to be picked up afterward,” said Robert Elmouchi, an environmental quality analyst with the agency’s air quality division.

“It is a very new industry and there are a lot more questions than answers right now,” he said.

Michigan’s Department of Licensing and Regulatory Affairs is in charge of licensing marijuana growers.

Gov. Gretchen Whitmer ordered the department in April to create a Marijuana Regulatory Agency to better regulate both the medical industry and upcoming recreational industry.

‘The agency is currently reviewing applications to grow for medical use, but there will be a separate licensing process for recreational ‘adult-use’ growing,” said David Harns, communications manager of the department.

As of May 10, the agency received 325 applications for licensing medical growers and approved 70 licenses, Harns said. No action yet has been taken on licensing recreational growers.

“The rules are still being written for the adult-use law,” he said.

Not everyone will be able to immediately apply for a recreational growing license once that’s done.

“For the first two years the only people eligible to apply for recreational growing are medical license holders,” Harns said. 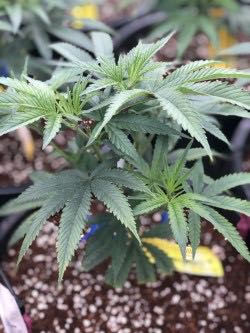 And regulation doesn’t stop once a grower is approved for a license.

The air and water divisions of the state’s environmental agency are examining the need to regulate recreational growing, Greenberg said.

Even prior to legalization, the state had an environmental working group to evaluate potential environmental impacts, Elmouchi said.

“In 2017-2018, our working group looked at the applicability of regulations from water, waste and air to determine if we need new regulations to address this industry,” he said.

The agency is researching how other states have prepared for potential environmental impacts.

The working group decided that as for now the existing regulations for air and water are appropriate to be applied to the marijuana industry, Elmouchi said.

But the environmental impact of the industry is unknown due to how new it is and the lack of research, he said.

For instance, the emission of volatile organic compounds into the atmosphere is an air quality concern, he said. It could pose a threat to the EPA limits for creating ground-level ozone.  Such restrictions affect emissions from automobiles now.

Another issue catching the attention of air quality regulators is marijuana processing. Some solvents used to extract oils from the plant are absorbed into the atmosphere and pose potential environmental and health risks, Elmouchi said.

Water pollution is another concern.

“All of the Water Resources Department programs have the potential to be impacted by the legalization of marijuana,” Greenberg said.

Growing and processing marijuana can be water intensive. The state estimates that it requires up to six gallons per plant, per day.

Michigan has laws that help protect against the significant water use that large-scale cannabis cultivation operations may require. The 2008 laws manage water withdrawals of more than 100,000 gallons of water per day, according to a 2017 DEQ marijuana working group report.

Other water concerns include improper discharge of waste.

Nutrient and chemical runoff from pesticides and fertilizers into wetlands and waterways pose a threat if not properly managed, Greenberg said.

If any facilities have a direct discharge of pollutants to surface waters, they must obtain a permit, Greenberg said. The agency has not issued any discharge permits to growers.

Electricity use is another aspect calling for environmental attention.

”We use a lot of electricity to run the lights during the cultivation process.

“What our company does to mitigate that is we use LED lights which use less electricity,” Neller said.

It is also partnering with the nearby Lansing Board of Water and Light to put up solar panels to offset electrical use.

“I think everyone in the industry is aware of these issues and is trying to find ways to address them and make the environmental impact less and move to a more sustainable model,” Neller said.

Some Michigan companies looking to join the commercial industry fear that extensive environmental regulations will hinder growers’ ability to enter the market.

“There’s too many regulations and they design them so you can’t win,”said Phyllis Waston-Loudermill, owner of ‘Hercompany’, a Muskegon construction company that works to employ people of color and women.

Loudermill wants to expand her entrepreneurial endeavors into the West Michigan marijuana industry, but worries that the regulations are too restrictive.

“All states have pretty stringent regulations and sometimes that can be burdensome for businesses to be able to meet, but as an industry we want to be able to move in the right direction in terms of corporate responsibility and sustainability,” said Morgan Fox, media relations director with the National Cannabis Industry.

The regulated industry is far superior when it comes to mitigating environmental impact than the illicit industry, Fox said.

“When you don’t have a legal market, you get illegal organizations on public land and throwing non-remedial chemicals into the environment with no oversight and no concern or incentive to make sure they are using safe products or protecting the surrounding environment.” Fox said.

Regulations on permitting and regulating may change as more data emerges. For instance, growers may be able to forego an air permit if their emissions are unsubstantial, Elmouchi said.

“Most big growing companies do not realize they are subject to Michigan’s air pollution control rules,” Elmouchi said. “Generally, companies are trying to comply, but they are not aware of all the regulations and required permits.”

Green Peak Innovations is working with the state and hosted regulators to learn about its operations, Neller said.

“Part of the reason they came to our facility is because they are also learning,” he said. “We are happy to help them become educated on what the operation looks like.”

Elmouchi agrees that there is a growth curve for regulators.

As the marijuana industry continues to expand and change, so too will the state’s regulatory and educational programs, he said.