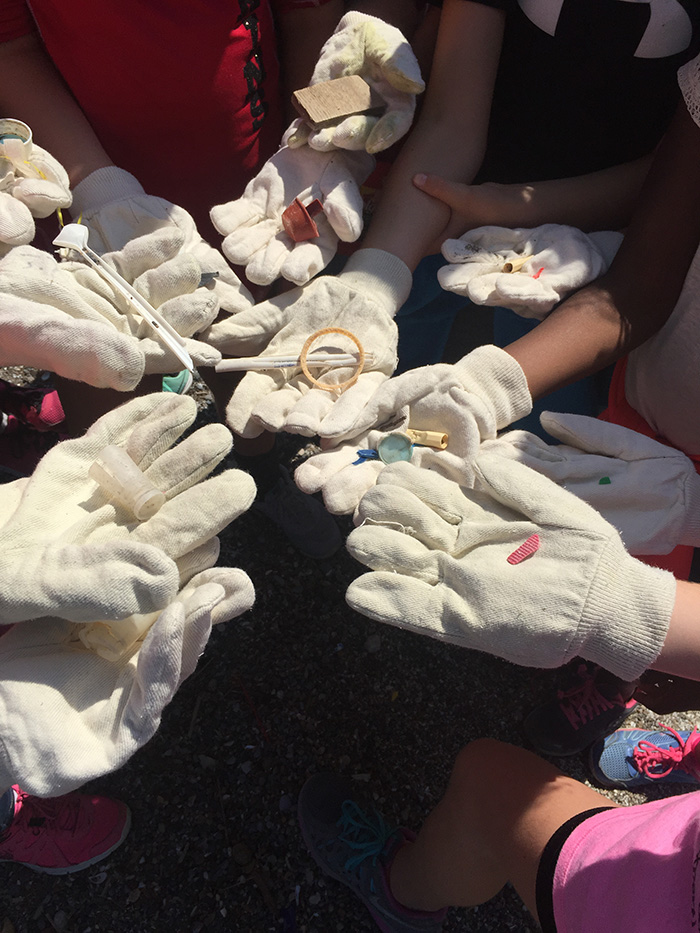 They can be limited with incentives, disincentives, or bans, said Jill Bartolotta, an extension educator at Ohio Sea Grant, an organization dedicated to the protection and sustainable use of marine and Great Lakes resources.  Bans have always been the most effective.

“Single use plastic items are used very briefly,” Bartolotta said. “For example, the average span a plastic bag is used for is twelve minutes.

“If every single plastic bag is disposed of correctly there should never be a reason for them to end up in the natural environment.”

Plastic water bottles, bags and cigar tips were targeted for research because they are in the top 10 items found during Great Lakes beach cleanups, Bartolotta said. Almost 1,000 people in the counties surrounding Cleveland were surveyed about these single use plastic items and reusable alternatives.

The largest barrier to using reusable bags is forgetting to bring them into the grocery store, Bortolotta said. The survey disclosed that people prefer incentives as a reminder strategy to bring bags to the store. Such incentives could be money off their purchase or a donation to a nonprofit organization.

A new strategy is decals for people to stick on their cars to remind themselves to bring reusable bags into the store, said Scott Hardy, a Sea Grant extension educator.

In 2017, Chicago put a 7-cent fee on disposable bags. It has already led to over a 40 percent decrease of disposable bags used per shopping trip, Drag said.

Another source of plastic in the Great Lakes is water bottles. Most people drink tap water at home, but move to bottled water when away from home, Bartolotta said. This is a group to focus on changing their behavior.

It’s not just the plastic bottles that water comes in.  Researchers have also found more microplastics in bottled water. These are small pieces of plastic that have proven harmful effects on fish.  The effects on people are still being studied.

“When you go to buy bottled water from the store, you are already buying a contaminated product,” Bartolotta said.

People think bottled water is cleaner, Bartolotta said. Due to the packaging process, there are more microplastics in bottled water than tap water.

However, people did not evolve to drink plastic, Drag said.

The most common barrier to reusable water bottles is forgetting to bring them, Bartolotta said.

The Sea Grant researchers found that 72 percent of people favor legislation to discourage use of single use plastic water bottles, Bartolotta said.

As for cigar tips, the focus group and many users didn’t care as much about eliminating marine debris harming birds and fish in Lake Erie, Bartolotta said.  They were more interested when it was presented as contaminating drinking water or making their neighborhoods look less pleasant. Focusing on those benefits will appeal to cigar users and proper disposal of tips, Bartolotta said.

But reducing cigar tips in Lake Erie is challenging. The average age of users is 14 to 25 years old, Bartolotta said.  It is hard to reach this audience since a majority is partaking in an illegal activity.

Most trash found in Lake Erie beach cleanups is single use plastics that can get tangled around animals’ bodies prohibiting growth or their ability to find food, Bartolotta said.

Birds and fish in the Great Lakes ingest tiny pieces of plastic, exposing them to any toxins on the plastic, Drag said.

And it has an economic cost. Globally, fewer people want to do ecotourism activities in water such as snorkeling or scuba diving because they don’t want to swim through garbage, Bartolotta said.

People are environmentally conscious; the problem is people are forgetting reusable options, she said.