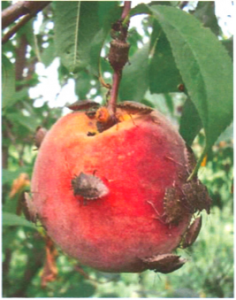 The samurai wasp could be the country’s best chance at beating back a stink bug that’s invading the Great Lakes region.

That’s what researchers concluded at the recent end of a project funded by the U.S. Department of Agriculture.

“We’re finding when it has the opportunity to leave the test arena to look for its preferred host, it will do so,” said Kim Hoelmer, an entomology professor from the University of Delaware. “This increases the chances it will attack its main prey.”

The big concern about introducing the brown marmorated stink bug’s natural enemy into the environment was it wouldn’t limit itself to attacking the invasive stink bug, but also go after native stinkbugs.

In laboratory tests the wasp did attack some native stink bug eggs, said Ernest Delfosse, a retired entomology professor at Michigan State University. However, that happened when it was given no other choice. A real-world setting would most likely provide different results.

“In nature, there are other ecological and biological factors that intervene,” Hoelmer said. “If a predator comes across a non-preferred host, it will investigate it then leave it alone.”

The study also produced a wealth of information about Michigan stink bugs.

“We did a lot of collecting of stink bugs all throughout the state,” Delfosse said. “We know a lot more about stink bugs in Michigan than we did before.”

Researchers collected 70 species of the bug, some of which hadn’t been found before. They developed new techniques for growing the insects in labs which produced more eggs to test against the wasp to see how it would respond.

The wasp’s scientific name is Trissolcus Japonicus. Researchers call it TJ for short.

“This will all be useful in evaluating TJ because it’s going to get here eventually,” Delfosse said.

While their lab experiments were conducted, a different strain of the samurai wasp found its way into the United States in 2014. Delfosse suspects it most likely arrived in shipping containers from Asia.

It’s unclear what the wasp’s impact will have on the native stink bugs. It’s been found in eight states and the District of Columbia.

What is growing more clear is the damage to American agriculture caused by brown marmorated stink bug in the Midwest and mid-Atlantic states.

It’s hard to fully quantify that damage because of how widescale it is, said Tracy Leskey, a U. S. Department of Agriculture entomologist.

“It’s just a really difficult pest to control, because it eats almost everything,” Leskey said

What has been recorded are damages in the millions of dollars. Leskey estimates the apple industry in the mid-Atlantic states suffered a $37 million loss because of the bug. Peach farmers lost more than half of their yield to the pest, she said.

With colder temperatures, the brown marmorated stink bug becomes a nuisance in the house as well. It seeks shelter when the weather changes, something with few practical solutions.

Some people try physical fixes like filling in holes in the house, or spraying pesticides around the property. Unfortunately, the insect is well equipped to handle both of these solutions, said Matthew Grieshop, another entomology professor at Michigan State.

Pesticides don’t work too well either because the stink bug uses a syringe mouthpiece it inserts into plants. It won’t consume much poison on the plant’s surface. It also uses stilts to walk, which elevates itself from the surface, allowing it to avoid contact poisons.

Which is why Delfosse says the best chance at lowering its numbers are by introducing its top predator in the U.S.

The brown marmorated stink bug was brought over unintentionally to the U.S. in 1996. Sightings in western Great Lakes States like Minnesota, Wisconsin and Michigan were reported as early as 2010.

This isn’t the first time scientists have considered a bug-on-bug battle to fight against invasive insects. In 2010, Minnesota officials released wasps to lower the emerald ash borer population, an insect that has destroyed many trees in the Great Lakes region.