Researchers are increasingly recruiting different wasp warriors in the battle against the emerald ash borer, a destructive, tree-eating beetle that has infiltrated the entire Great Lakes region.

Costly insecticides, tree-removal strategies and bans on moving firewood have provided some defense against the critter.

But a bug-on-bug battle strategy appears to hold promise.

Consider:
– Foreign wasps are one line of defense. Great Lakes researchers have studied wasps that feed on emerald ash borer eggs and larvae for years; Minnesota will use the foreign critters as a biological control in roughly two months.
– Other wasp species make great spies. Researchers know a borer infestation is nearby when the adult beetles are found in wasp nests.
– Domestic wasps may also be weaponized. Michigan State University researchers have found a promising native species that also favors feasts of ash borers.

Minnesota Department of Agriculture officials recently enlisted foreign wasps to combat beetles in a remote area of the state.

The emerald ash borer was initially detected in Minnesota in May 2009. The state removed an estimated 135 trees from the St. Paul/Minneapolis area to stop the beetle’s spread, said Geir Friisoe, director of the department’s plant protection division.

The current infestation is in marshy area near the Mississippi River, making tree removal impossible. “That’s why we turned to biological control as an alternative,” Friisoe said.

Chinese parasitic wasps are natural predators of the emerald ash borer, according to findings from federal, state and university entomologists.

Researchers identified three species of Chinese wasps that are effective against the beetle. One species attacks the beetle’s eggs; the others attack the larvae.

These wasps reduced beetle populations by 74 percent in Chinese ash trees that are also native to North America, according to the findings.

In order to release the three species of wasps, states must obtain a permit from the United States Department of Agriculture; every Great Lakes state currently has a permit.

Although time and labor intensive, the wasp base camp – operational since 2009 – produces thousands of tiny wasps each week, said Jonathan Lelito, facility manger.

It will take several years to know the success of the wasp raid in Minnesota, Friisoe said. That’s because the wasps must adapt to their surroundings first.

Still, using wasps to control beetles is less harsh on the environment, he said.

“With pesticides you have the possibility of impacting other insects that feed on that tree,” he said. “Also, if you’re using a drench treatment, you have to be very careful about not impacting water quality.”

Introducing foreign species into a habitat can have unforeseen consequences, but Friisoe isn’t worried about the foreign wasps taking over; they can’t sting humans and have a preference for tree-eating critters like the emerald ash borer.

“If bio-controls can buy a few extra years for scientists to maybe come up with other management strategies or other tools, then so much the better,” he said.

Philip Careless, a professor at the University of Guelph in Ontario, discovered a predator wasp – the kind that stings – that stockpiles adult beetles at its home base.

It’s like a big trap, McCullough said. And it’s useful to researchers and insect fighters. The presence of beetles in the nest signals that an infestation is nearby.

And since the method relies on observation, there’s no real harm to the environment, she said.

Careless works with Forest Service and Maine entomologists to encourage this kind of detection method.

The science is new, but native wasps could also be effective at controlling the beetles. 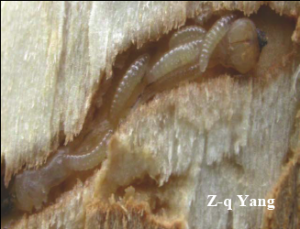 Michigan State University professors and researchers Deb McCullough and David Cappaert made a surprising discovery in 2007. They peeled back the bark of a tree to find a combination of beetle and wasp larvae – the kind that later feeds on beetles.

Not much is known about the wasp’s behavior – like why it started feeding on beetle larvae – but it’s a good sign, McCullough said.

Foreign wasps have to adapt to climate conditions and other species before preying on beetles. If they don’t establish, they aren’t effective.

Native wasps have a home-field advantage even though there’s no guarantee they’ll have a dramatic impact on beetle populations in the long run, McCullough said.

Government researchers are currently looking into using native wasps to control beetle populations, Lelito said. But the agency has yet to determine the method’s effectiveness, and there’s no drive to mass-rear them for production, he said.

Still, it’s worth researching, McCullough said. Pesticides can be used effectively in urban areas; it’s more complicated in forest settings because of the risk to water quality.

Wasps and other biological controls have potential, especially if there are already established in an area, McCullough said.

“The more we learn about them, the better chance we have of making them useful,” she said.

TOMORROW:
See how the biological control facility in Brighton, Mich. produces thousands of tiny parasitic wasps to be used in the battle against the emerald ash borer.