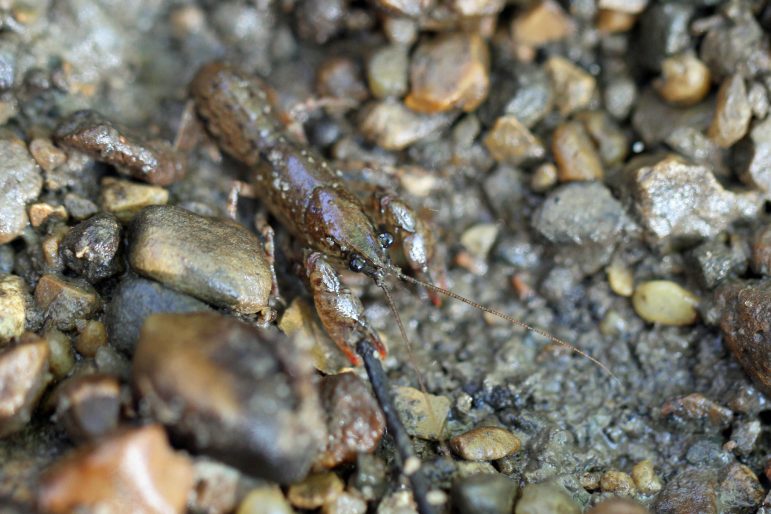 Crayfish in Burt Lake are thought to be on the decline. Image: Greg Schechter, Flickr.

Drugs seeping into groundwater threaten crayfish and have a domino effect of environmental impacts that harm fish and other species, according to new research.

Pharmaceutical pollution happens when medicines are improperly disposed or flushed into septic tanks and sewers as the body eliminates them, said Paul Moore, an ecologist from Bowling Green State University’s Laboratory for Sensory Ecology.

Treatment can’t filter them so they make their way into lakes and streams, he said.

Moore recently published research that shows even at low levels, a popular headache medicine has a negative environmental impact. His research exposed crayfish to naproxen, an over-the-counter pain medication.

And that’s bad news for many other aquatic species faced with pollution from pharmaceuticals.

Crayfish are a keystone species, one that many others species depend upon, Moore said. If they died, so would trout and bass. That would lead to algae overgrowth and in turn, insects and invertebrates would die when decaying algae used up all the oxygen.

Moore’s research was prompted when anglers reported fewer crayfish in Burt Lake in Cheboygan County, Michigan. Although the observations were not scientific, Moore decided to evaluate the potential threat of pharmaceutical exposure to crayfish survival.

He placed crayfish into simulated streams made of cinderblocks at the University of Michigan’s Stream Research Facility in Pellston, Michigan. The streams had a constant flow that mimicked a natural river, he said.

The study found the naproxen made the crayfish less aggressive, Moore said.

“What is unique is that [crayfish] fight all the time, and the fighting determines who gets food, who gets shelters, who gets mates, ” he said. “Depending on the different concentrations of the exposure, we saw different effects on their fighting behavior.”

Moore said the reduction of aggression is likely because naproxen impacts the crayfish’s sense of smell. Smell sends their brains cues about critical elements of survival.

“When they start to fight, they release chemical signals back and forth, and inside these signals are anything from the sex of the animal to the reproductive state, even a type of identity so they know if they fought this guy yesterday or the day before,” he said. “So if you block that ability . . . they fight more intensely or less intensely based on the amount of exposure they have.”

Moore focused on naproxen because he said non-prescription drugs are the fastest growing source of pharmaceutical pollution.

This type of research raises alarm for people, said Lyman Welch, the legal director for Alliance for the Great Lakes, an advocacy group based in Chicago.

“The effects on fish and aquatic life can be a real indicator of concern for humans,” he said. “The fact that pharmaceuticals harm fish can act as a canary in a coal mine and give us a warning that we need to pay more attention.”

“There is no known [human] health risk at the low levels of the chemicals that are being found right now, but our detection levels have improved, and we are starting to see these chemicals.” Welch said. “And there is a need to do additional research to better understand the impacts of these chemicals.”

Alliance for the Great Lakes supports forcing pharmaceutical companies to help pay some of the cost for disposal. Only nine counties throughout the U.S. require drug companies to pitch in, but the laws are changing, Welch said.

Cook County, Illinois, approved an ordinance last November that requires pharmaceutical companies to pay for some of the disposal cost. The buy-back program forces those who sell medications to register with the county and pay a fee for disposal. The ordinance has a provision that penalizes the drug producers if they pass the cost on to consumers.

Counties in California and Washington have similar laws.

But Welch said most programs rely on consumers to safely dispose of medications.

The Tip of the Mitt Watershed Council in Petoskey, Michigan, helped organize safe drop-off sites for unused drugs within four-counties in Northern Michigan, said Executive Director Gail Gruenwald. The project is funded by grants from local community foundations, the Michigan Department of Environmental Quality, the Environmental Protection Agency and others.

It is a coordinated effort by pharmacies, hospitals and law enforcement. Prescription medications, including narcotics, can’t be left in an unsupervised dropbox and law enforcement must transport controlled substances to disposal sites.

“At this point there are not solutions for removing pharmaceuticals once they are in lakes and streams. So this is a prevention issue,” she said. “We need to keep it out of the waterways.”

Still, Moore said since we can’t eliminate use of medications, improving septic and sewer systems to filter pharmaceutical pollution is a critical need.

“The second step is to look at how we treat the wastewater. We have pretty good systems, but not what they could be,” he said.

Experts say 93 percent of drug compounds leave wastewater plants. While treatment could be improved to eliminate them, it would take a huge investment.

According to the the US Geological Survey, 80 percent of the nation’s waterways contain pharmaceutical pollution.

As for Moore’s research, this summer he will recruit citizen scientists to conduct an official count of crayfish in Burt Lake to determine whether the population is seeing an actual decline.

Editor’s note: This story was corrected January 25, 2017 to report that the 12 tons of waste recovered was for the past nine years, and that funding for the program comes from grants provided by local community foundations, the Michigan Department of Environmental Quality, the Environmental Protection Agency and others.