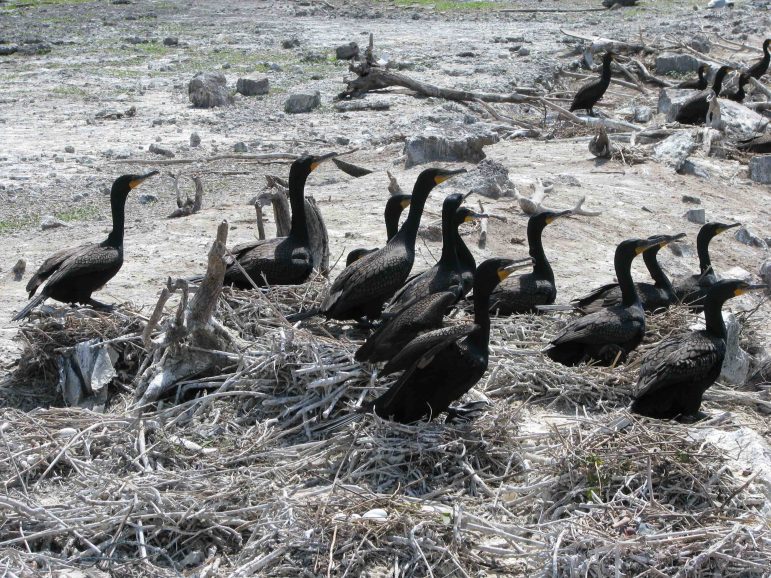 Double-crested cormorants are the bane of many Great Lakes anglers, devouring prize game fish and damaging the sport and commercial fishery.

At least that’s a widely held belief about these birds — and a generally wrong one, Northern Illinois University (NIU) researchers say.

Cormorants’ fish-stealing rep may be a bum rap — and the truth is more complex, as the first dietary study of cormorants in southern Lake Michigan shows.

“Because this is the first such study, its results will help to inform discussion among local stakeholders and will provide valuable data to other researchers studying cormorant diet in the region,” said lead author Patrick Madura, who conducted the study as a master’s student.

Co-author Holly Jones, an assistant professor of biological sciences, said, “We wanted to provide some science behind many of the emotional responses that people had to cormorants. We definitely hope this sort of scientific evidence shows people that though they perceive the cormorant as stealing their fish, that’s not true in large part.”

With more than 2,000 nests, the only significant cormorant nesting colony in the lake’s southern basin is in East Chicago, Indiana, at the site of a steel mill. The U.S. Fish & Wildlife Service helped the scientists get access to the privately owned location.

“In southern Lake Michigan, potential predation on salmon and trout” — salmonines, in biology terminology — “by cormorants is a special concern as they comprise the same species most targeted by Indiana fishers,” the study said. Those species rely on hatchery-augmented reproduction to sustain their populations.

As the Indiana Department of Natural Resources said in its 2015 wildlife science report, “Double-crested cormorants are not endangered, but are viewed with concern in the Midwest because increasing populations pose a potential threat to local fisheries.”

Researchers found no salmon species in regurgitated cormorant pellets during the 2013-14 study period. They also found no coded wire tags that the Illinois and Indiana departments of Natural Resources and the Fish and Wildlife Service used on some stocked Chinook salmon during that time, Madura said.

Even better news: The cormorants are chowing down instead on invasive species — 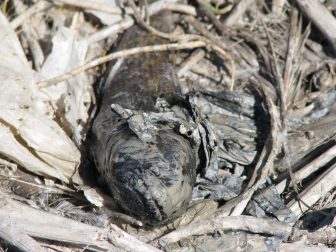 A regurgitated round goby near a Cormorant nest. Image: Patrick Madura

mainly alewife, round goby and white perch — which together accounted for 80 to 90 percent of their diet.

Previous studies found the round goby to be a favorite food of cormorants in Lake Huron’s Saginaw Bay, northern Lake Michigan’s Beaver Archipelago, Lake Ontario and the Niagara River.

Native to the Great Lakes region, cormorant numbers plummeted due to DDT exposure and human depredation. They’ve rebounded thanks to a ban on DDT and enactment of legal protections.

One downside for sportfishing, however: Cormorants do like yellow perch, which is the second-most-popular game fish for Indiana anglers and which have been suffering a serious population decline since the early 1990s, according to the study published in the “Journal of Great Lakes Research.”

Their menu varies by season, according to the latest study and previous research. For example, a U.S. Geological Survey study of Saginaw Bay’s Little Charity and Spoils islands found greater predation on yellow perch in spring compared to the rest of the breeding season.

Madura and Jones wrote, “The diet analysis in this study does not support the hypothesis that cormorants have a negative direct impact by predation on fisheries in southern Lake Michigan. “Cormorants did not affect the salmon fisheries through direct predation even though there were 1.1 million juvenile salmon and trout stocked within cormorant foraging range during this study,” including Buffington Harbor only a couple of miles away. 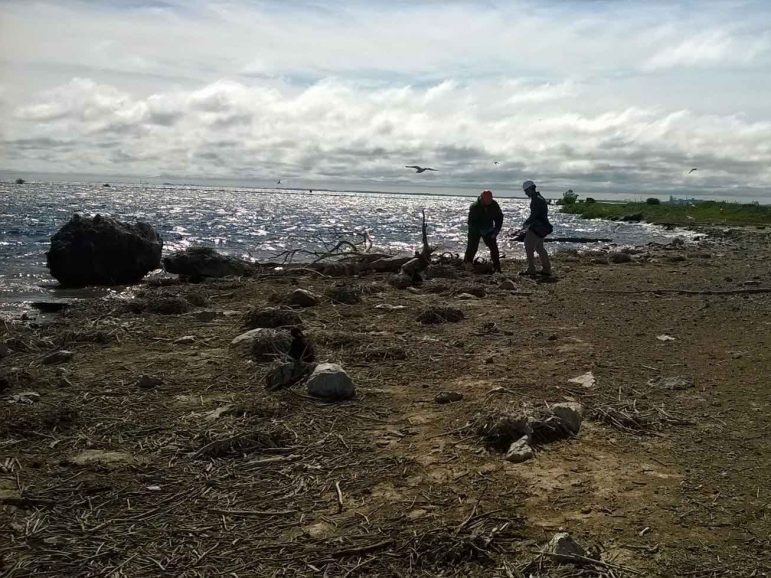 Past studies have reached varying conclusions about the cormorants’ impact on game fish. For example, the birds were linked to a decline in the smallmouth bass population in the eastern basin of Lake Ontario and of yellow perch in Oneida Lake, but scientists found no negative effects of smallmouth bass in the Beaver Archipelago.

“No studies to date have demonstrated that cormorants have a consistently negative effect on fisheries over broad geographic regions,” Madura and Jones wrote.

They also noted that some invasive species “can also be beneficial” to native species. For example, the growth rate of Lake Erie water snakes increased after round goby became the major part of its diets — a new food source that it possible to delist the water snake from Endangered Species Act protection.

Will the findings polish the negative image that cormorants have among anglers?

“That’s sort of the hope,” Jones said. “We wanted to provide some science behind many of the emotional responses that people had to cormorants. We definitely hope this sort of scientific evidence shows people that though they perceive the cormorant as stealing their fish, that’s not true in large part.”

She noted that the cormorant has a more negative public image among anglers than other common fish-eating birds, perhaps in part because their colonies are conspicuous and can kill the trees where they nest.

Gulls aren’t perceived as big of a conflict because a lot of them have switched to garbage diets, Jones said. “Gulls have become so adapted to the human-adapted environment and are eating our trash instead of our fish.”

And pelicans seem to be a revered species, she said.

In Michigan, the Department of Natural Resources reported that five nesting colonies in the state have been managed since 2004 in the Les Cheneaux Islands, Ludington, Thunder Bay, Beaver Island and Bays de Noc areas. 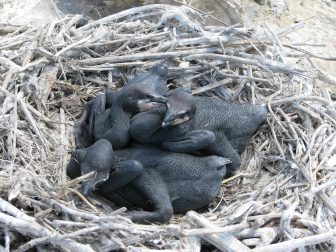 “The birds are also harassed at 10 Northern Michigan locations where the birds have concentrated in large numbers and feed on fish populations,” according to a U.S. Department of Agriculture presentation last year to the Lake Huron Citizens Fishery Advisory Committee.

Related story: A federal judge says the U.S. Fish and Wildlife Service overstepped its bounds when it allowed cormorants to be killed