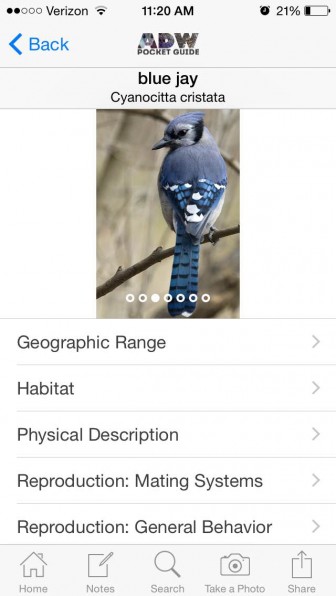 A team of students and researchers at the University of Michigan has created an app that serves as a pocket guide for Great Lakes animal species at the region’s parks, museums and zoos.

The Animal Diversity Web is an online database largely run by U-M students. It includes an encyclopedia of the natural history of the region’s animals.

The Animal Diversity Web Pocket Guide app is an attempt to use the expansive database in an innovative way.

The team worked with staff at each location to develop unique content for the app, said business director Tanya Dewey. It reports the kind of species people might see in the Great Lakes region and their locations. It also includes contact info for the locations and a “trail” that the Animal Diversity Web staff created in collaboration with the staff at each location.

Users can go to the location and follow markers used to gain more information from the app.

One of the location guides in the app is at the University of Michigan’s Museum of Natural History. Kira Berman, the education director at the museum, says that the collaboration process was very involved.

“We had an employee who was focusing on it, and the people working on 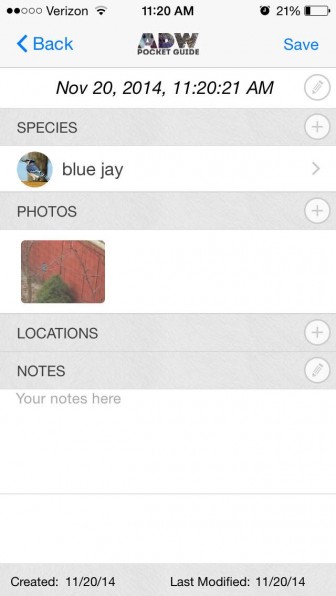 the app met with that employee I think every few days until we [finished],” she said. ”The ADW staff helped us with the app and we gave them feedback of what functions we would like.”

Users can also tour their own backyards with a section called “Pets and Pests!”

While the app is free, the content for certain locations is available only after the user pays $3.99 for full access to some features.

The app is simple and elegant, but some new users may not be aware of everything it provides without playing with it.

I tested it out one morning when I saw several beautiful blue birds flying around outside my window, perching on branches and fences. I started by snapping a picture, albeit a terrible one:

The birds were blue jays, which I could tell from the distinctive markings on their backs. To test the app, I pretended that I didn’t know what they were.

The app has pictures and descriptions of 422 animal species, including 236 birds. The birds are separated by species, which makes the list surprisingly manageable. The app has clear thumbnails and each entry includes at least one photo.

I went into the birds page and looked at every blue bird, finding the blue jay in seconds. The entry had six high quality photos and a wealth of information, including habitat, physical description, behavior, food habits, conservation status and more.

Users can upload their own pictures and add notes, so I uploaded the picture I took. The app saves your photo locally, which is convenient for note-taking and personal records.

However, Dewey says the app is an ongoing project and even more is to come, including the possibility of letting users contribute to the database themselves by uploading content.

This app is a great guide to Michigan species that is extremely easy and fun to use. It could definitely replace a printed pocket guide. It doesn’t seem to have been rushed out to market, and feels like a finished product.

It is available in the App Store here.