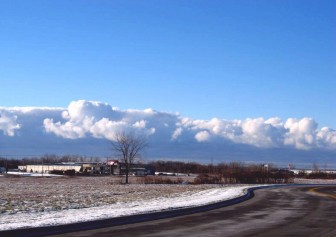 Drones could keep a better eye on weather patterns like this one creating lake effect snow near Lake Ontario. Image; National Oceanic and Atmospheric Administration

Some weather researchers say that drones could help predict a kind of snowfall associated with the Great Lakes shoreline.

These lake effect snows happen when “cold air masses move over warm lake waters,” according to the National Oceanic and Atmospheric Administration.  They are common in the Great Lakes region from November to February.

Derrick Herndon, a research specialist at a satellite center at the University of Wisconsin, said unmanned aircraft would be useful to research and predict this type of weather.

Lake effect snows happen in only a few hours and they need to be reported with accuracy, Herndon said. Drones can get a full picture of the temperature and moisture of the region to help determine if they are likely.

Jeff Masters, the director of meteorology at the Weather Underground, a service that predicts weather for major cities worldwide, agrees with Herndon. What’s more, he said drones should be used here to assess storm damage.

“Another ideal use would be in damage surveys immediately following a major tornado or hurricane,” Masters said. “The drone could photograph the damage, advise first responders on how to avoid blocked roads, and pinpoint areas most in need of search and rescue efforts.”

A significant problem: drones for such uses are not approved by the Federal Aviation Administration.

This isn’t the case elsewhere. NASA’s Global Hawk, which is 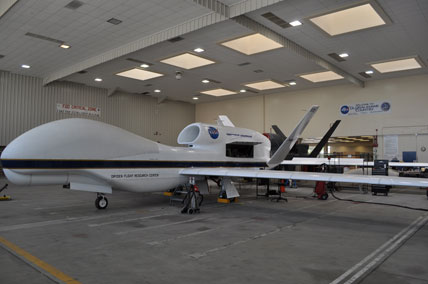 an unmanned aircraft used for hurricane and tropical storm research, recently flew its 100th mission. This project has been active for three years, but it didn’t have an easy start.

Research was done over the Atlantic Ocean, so coordination with multiple countries was necessary. But the ocean location was also an advantage.

Safety is the top priority, according to federal regulators. Unmanned aircraft can’t be flown over land mainly because drones dropping sensors on land could potentially endanger people, said Herndon.

That is why research over the ocean was allowed.

“It was a long pathway to be able to do what we’re doing,” said Herndon, who was a forecaster in the Global Hawk project. He said there were a lot of legal obstacles before this project was underway.

The Federal Aviation Administration allows the use of drones for “helping with scientific research and environmental monitoring by NASA and NOAA.”

Could unmanned aircraft be used to study and monitor weather in the Great Lakes region?

It would be a huge advantage, Herndon said. Unmanned aircraft would cover more terrain than weather balloons. The balloons can only measure so much data, so there are huge gaps in the data that the drones could cover instead.

“I think there is value in using drones in weather research,” said Gary Jedlovec, a satellite meteorologist at the Marshall Center in Huntsville, Ala. “Sometimes we can’t use satellites to do just those things.”

It is necessary to research with a combination of both satellites and drones, said Herndon.  Satellites are useful because they measure cloud height, temperature, water vapor, winds in the atmosphere and sea surface temperature. But satellites can’t measure everything.

The drones Herndon can see used for other weather research aren’t as big as the Global Hawk, which has a wingspan of over 116 feet. Some used for this kind of research are the size of a model airplane, he said.

He said using drone research with satellites could potentially improve satellite algorithms in the future.

“Laws often don’t keep up with the technology,” said Herndon.

But unmanned aircraft can get direct observations and fly below clouds to pinpoint other data that satellites usually infer. Drones will measure the information and get closer than a satellite could.