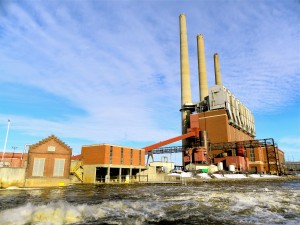 When President Obama announced a proposed rule to reduce power plant emissions that contribute substantially to climate change, predictable objections from Republicans came fast and furious — job destroyer, too expensive, unnecessary, presidential power grab — even that there is no such thing as human-induced climate change.

The traditional utility industry raised its objections based on practicality and cost.

Now a funny thing has occurred — some in the GOP and the industry have backed away from the initial relentless criticism.

For example, the director of Michigan’s Department of Environmental Quality (DEQ) in a Republican administration has endorsed the concept.

Meanwhile, Michigan’s two largest utilities are undertaking initiatives — including closure of older coal-fired plants and more reliance on wind — that would help the state achieve the new goals.

The change — if it becomes law — could speed the economic expansion of the alternative energy industry, including manufacturing and construction businesses, experts say.

As RJ Wolcott recently reported for Great Lakes Echo, Michigan — which has no coal mines — imported more than 7 million tons in the last quarter of 2013.

“Last year, 54 percent of electricity flowing into Michigan homes and businesses came from coal-fired generators,” Wolcott wrote. “And all of it arrived by train from other states, including Wyoming and Montana.”

And in the last three months of 2013, Illinois, Indiana and Ohio were among the five states importing the most coal.

According to the U.S. Energy Information Administration, nationally, electricity generated from coal nationally has declined from 5,453 to 4,345 megawatt hours daily during the past decade

Across the northern border, Ontario has closed all its coal-powered plants, as Great Lakes Echo reported in March.

Relying on Executive Branch authority under the Clean Air Act, the proposed EPA rule targets carbon dioxide emissions from plants that produce about 40 percent of U.S. carbon pollution. The rule is intended to reduce carbon emissions nationally by 30 percent by 2030, compared to emissions in 2005, the baseline year.

To be fair, some Democrats objected too, primarily those from coal mining states who see the new rule as a further body-blow to an economic mainstay of their constituents — much the way tobacco state lawmakers have long fought federal measures to reduce smoking and Michigan lawmakers objected to tougher federal fuel efficiency standards.

Despite Land’s hyperbolic rhetoric, Peters has expressed his qualms about the proposed rule. “The setting of achievable and affordable carbon reduction goals is an essential and important first step in the process,” he said in a news release. “However, I am concerned that the proposed draft EPA rule imposes a more stringent standard on Michigan than surrounding Midwestern states.”

The EPA proposal, which will undergo extensive public comment, allows state-by-state variations in targets and timetables.

Peters suggested that there are helpful lessons to be learned from the experience of dealing with fuel efficiency standards. The administration’s carbon emissions rule, he said, “needs to include a mid-term review process to ensure timelines are realistic and recognize that progress may not be linear. I believe that a process similar to what was adopted to increase motor vehicle fuel efficiency standards should be included in the EPA rule.”

As for moderating attitudes, for example, Michigan DEQ Director Dan Wyant discussed the president’s proposal with Michigan Public Radio, saying, “We support that goal. We think it’s a legitimate goal.” He added that the administration of Republican Gov. Rick Snyder administration will seek flexibility to achieve the new standards.

In fact, Wyant noted that Michigan is already on track to reaching the 10 percent renewable energy goal set by a 2008 state law. The state will request that the federal government count utilities’ efficiency efforts toward the new emissions goals.

In addition, the administration of would-be GOP President Chris Christie backs the proposal.

A New Jersey Department of Environmental Protection press aide remarked that New Jersey is better positioned than other states to comply because its utilities have been moving toward the use of cleaner fuels.

Aside from politics, the proposed rule will generate other winners in Michigan if it takes effect. Winners include the alternative energy industry — fuels, manufacturing and capital construction of facilities — an industry that the Snyder administration has been assiduously courting and subsidizing.

And after additional thought, some utility officials are also now softening or even scrapping their objections because their companies are well on pace toward the proposed target.

In part, that’s because these utilities have already reduced emissions significantly since the 2005 base year through new technologies, use of more natural gas — due to fracking — and alternative fuels, and increased energy efficiency and conservation measures in homes and businesses.

In Michigan and elsewhere, many coal-burning plants are nearing the end of their expected lifespans, so utilities already have been planning how to replace them. Consumers Energy intends to close its seven oldest plants by 2016.

Recently, DTE Energy exercised an option to buy one of the two Pheasant Run wind parks in Huron County as part of what it called efforts “to expand the company’s renewable energy resources and meet the state’s renewable energy goals. DTE Energy will have almost 1,000 MW of renewable energy assets, equivalent to 10 percent of its power sales by 2015.” Wind will provide most of that.

DTE intends to own facilities that will provide up to half of that 10 percent and will get the rest from third-party producers, such as NextEra Energy Resources — seller of the Huron County wind park.

A March report by the Union of Concerned Scientists concluded that by 2030 the state can affordably meet almost one-third of its electricity requirements from in-state renewable energy resources.

Eric Freedman is director of the Knight Center for Environmental Journalism. This article is adapted from a column in Domemagazine.com.

One thought on “Can curbing carbon build the economy?”