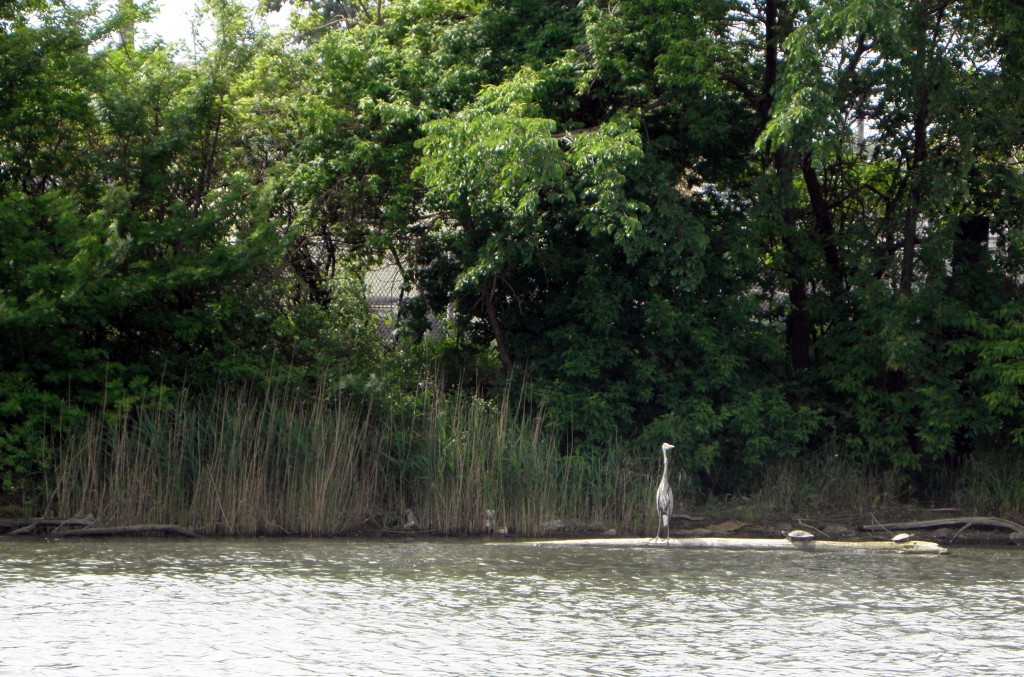 A Great Blue Heron shares a log with a turtle along the Rouge. Photo: Karen Schaefer.

Join us  in our last installment of our Detroit’s Water Renaissance series. This story is produced by Current State and Great Lakes Echo with support from the Great Lakes Restoration Initiative.

So far we’ve looked at lucrative walleye fishing on the Detroit River,  daylighting streams, rebuilding shorelines and the destruction of the Rouge River. Today we explore efforts to clean up the Rouge.

When a river is as heavily polluted as Detroit’s Rouge River, it’s hard to imagine how it could ever be cleaned up.  We heard last week that the Rouge is one of the most polluted rivers in the Great Lakes.  Yet there is a plan to, if not restore the Rouge to its pre-industrial state, at least bring the river back to better health.  As independent producer Karen Schaefer reports, it will take a lot of time, money, and cooperation between government, non-profit groups, and industry to get the job done.  But some of that work is already underway.

Listen to the story here…

SCHAEFER:  When it started production in 1928, the titanic Ford Rouge Complex along the Rouge River – the world’s largest integrated factory – had everything needed to turn raw materials into automobiles.  The Rouge was not just one factory, but many, from steel mills and blast furnaces, to a huge power plant, rail lines and riverside docks. And it produced a lot of pollution.  But today’s Ford Motor Company is trying to turn around its dirty legacy.

SCHAEFER:  Ford Rouge features a new kind of assembly plant with very little pollution, not even packaging waste.  The 2-Billion dollar Dearborn Truck Factory – still Ford’s largest – opened in 2004 and employs about 6- thousand workers making 12-hundred trucks a day.  To illustrate what’s different about this factory, tour guide Bob Simmons takes us up to the roof. 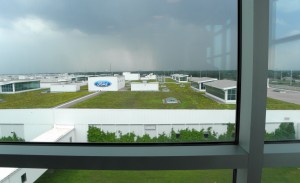 BOB SIMMONS: This is our roof.

SIMMONS:  This is the largest living roof in the world.  It’s 10.4-acres.  It’s enough area that you could actually design a 9-hole golf course on it.

SCHAEFER:  We’re looking out at a vast flat roof covered in low-growing plants.  The living roof is just one part of a stormwater storage system that includes porous paving and wetlands, designed to reduce runoff to the Rouge.

SIMMONS:  It has lots of other advantages, too.  It insulates the plant, makes about a 10-degree difference summer and winter.

SCHAEFER:  Other green innovations include roof-top skylights that bring in daylight and reduce electricity. Outdoors, plants, not bulldozers, remove toxins from the soils of this former brownfield.  And on the assembly line, it’s clean, nearly odor-free – and a lot quieter than you’d expect.

AMBI:  sounds of factory up and fade out to sound of boat on the river, under:

BURNS:  There’s a bank swallow colony right here.  You see where they burrow their holes in just below the dirt line there.

SCHAEFER:  Downstream from the Ford Rouge factories, Detroit Riverkeeper Robert Burns points out signs that the Rouge is returning to life.  Spawning carp leap out of the water and Great Blue herons stalk the shallows near the overgrown, concrete shoreline.  Burns says industry — once part of the problem — has become part of the solution.

BURNS:  I came out here with the environmental person from US Steel and we drilled some small holes to create more nesting sites for them.  So that’s the kind of thing of small things that we do.  We work with DTE Energy and US Steel and they’ve all got a little bit more of environmental focus now.  They’ve done quite a bit of work.

AMBI:  fade out boat, under: 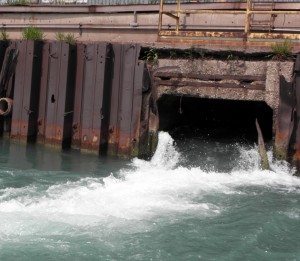 Some outfalls on the Rouge are still active – this one on Zug Island is only dumping cooling water from the steel plant. Photo: Karen Schaefer.

SCHAEFER:  But one cleaner factory and more concerted environmental efforts by others can’t alone solve the array of pollution challenges facing the Rouge.  One of the most costly problems has been reducing overflows of sewage from the densely populated watershed.  Jennifer Tewkesbury is with the Michigan Department of Environmental Quality.  She says over the last 30-years, Detroit and other communities have spent more than 2-Billion dollars on solutions like building huge basins to retain storm water, so it doesn’t spill over into combined sanitary sewers during heavy rains – and dump raw sewage in the river.

TEWKESBURY:  Each plant has been looking at their systems, they’ve been upgrading.  I think at one point, there were 168 combined sewer overflows within the watershed, which means that, when it rained, everything came out.  Now we’re down to — I think Detroit has 28 left that they need to repair.

AMBI:  Sound of riverboat horns, under:

SCHAEFER:  Reducing air pollution in Rouge communities is the focus of Southwest Detroit Environmental Vision.  At Riverside Park, near the Ambassador Bridge to Canada, diesel pollution from idling trucks is a major concern.  Executive director Kathy Stott says with funding from the EPA, her group has helped local truck fleets, even riverboats, convert to cleaner fuels.

STOTT:  If you look to the east, there is the J.W. Wescott mailboat that services the freighters that come down the Detroit River.  We’ve also installed pollution control devices on more than 150 trucks.  We have replaced 17 trucks and two school buses in the neighborhood.

SCHAEFER:  Other groups are addressing issues like trash pick-up and flooding.  Friends of the Rouge holds annual river clean-up events with thousands of volunteers.  And the Alliance of Rouge Communities is educating homeowners about simple practices to reduce run-off, like building rain gardens.  Jennifer Tewkesbury of the Michigan DEQ says the combination of all these efforts are making progress toward completing a 20-year plan to make the Rouge a healthier river.  But there’s still at least one project with a 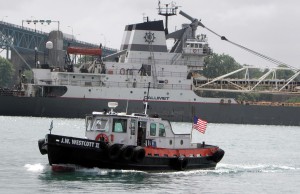 SCHAEFER:  Tewkesbury hopes that money will come from the federal Great Lakes Legacy Act.  That funding is set to expire in 2014, although Congressional re-authorization is already underway.  The same legislation would also continue funding for Great Lakes Restoration Initiative, which Tewkesbury says can be used for other Rouge projects, like restoring habitat.  And that funding is crucial.

While greening a large roof, drilling some swallow holes, and buying a few new buses all help, without removing the contaminated sediment, restoration of the Rouge will be incomplete.

AMBI:  Sound of water lapping, under:

SCHAEFER:  The prospect of a healthier river has sparked interest in bringing recreation, even eco-tourism to the Rouge.  Already there’s a 6-mile bike path along the Rouge that runs through the ground of the University of Michigan in Dearborn.  Once the concrete is removed, there are future plans for kayaking in the old channel.  There’s even an idea to one day bring visitors from Great Lakes cruise ships up the river to the Dearborn campus, where they’ll tour the old Henry Ford estate, visit the Rouge interpretive center, and walk through the natural area.  Kathy Stott, who grew up in Southwest Detroit, is excited about by the prospect.

STOTT:  I love this community.  I enjoy the camaraderie of all my friends, all the community organizations, all the business owners, all the people, the people that fight alongside of us in all of our endeavors.  You know, it is truly home. [she ends in a question upswing]

SCHAEFER:  Stott may sound a little uncertain.  And she has good reason to be.  A lot still has to be done.  But there’s one thing she’s sure of — that making the Rouge River a cleaner, healthier place is worth the effort.  For WKAR, I’m Karen Schaefer in Detroit.