The second story in our series focuses on efforts to re-engineer the Detroit River’s concrete shoreline.

Listen to the story:

The Detroit River is 32 miles long on the U.S. side, and of those 32 miles, just one mile is still an undeveloped wetland. That mile, the Humbug Marsh, is tucked behind an old steel plant off a quiet two-lane highway in Trenton, an extension of Detroit’s downriver post-industrial sprawl. The marsh’s dirt parking lot smells like burning plastic from a chemical plant next door, and a working power plant sits on the adjacent lot.

Still, on a cool weekend morning in May, Humbug Marsh was atwitter; the waterway beyond the trees was filled with swans, geese and fishermen. Inside Humbug, visitors from the surrounding area were taking free migratory bird tours organized by the Detroit International Wildlife Refuge.

Humbug is the refuge’s centerpiece — and the epicenter of a major transition on the Detroit River. 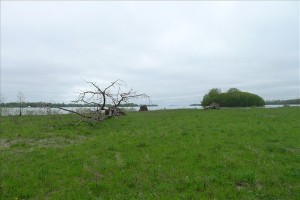 The Detroit River from the Refuge Gateway. This unassuming site has been re engineered from steel and cement to a “soft” shore. Photo: Lewis Wallace

“I remember going past Wyandotte, the city I live in, and the water was white,” said longtime downriver resident Mickey Widener, who stopped in to check out the refuge. “You’d go past Great Lakes Steel and the water was orange. My ride here…was heavy, heavy, heavy industrial. Now it’s like driving down a country road.”

Since the early 2000s, federal and state agencies as well as private companies have invested millions to clean up industrial sites and create new environments for wildlife, often using a technique called soft shoreline engineering.

The premise of softening shorelines is simple: landowners take out old cement and steel pilings and replace them with a diverse mix of soil and native plants in order to create inviting wetland habitats.  The Detroit International Wildlife Refuge and its partners have started over fifty soft shoreline projects since the refuge was founded in 2001, and the refuge itself acquires more land almost yearly. It’s now a patchwork of almost 6,000 acres of riverfront, islands and inland sites spanning the river’s 32 miles.

But beyond the Humbug Marsh, which is just a portion of the refuge, much of the riverfront remains a mess of old industrial sites and burned out buildings, and the positive effects of new development aren’t reaching everywhere.

A small start with soft shorelines

John Hartig, the manager of the Detroit International Wildlife Refuge on the U.S. side, is the man behind much of the shoreline transformation. He’s an infectious enthusiast for soft shorelines; walking across the barren entrance to Humbug, he gestured excitedly towards a few rocks in the dark river.

“Engineers wanted everything straight lines,” he said. But fish and invertebrates love the curviness of rocks and mud. “We want some sinuosity, some undulation.”

Soft shorelines are part of Hartig’s vision for a network of green sites and wetlands linked by bike paths all up and down the river’s 32 miles.

“What we’re doing with birds and fish and outdoor recreation is really part of a bigger strategy to make a city sustainable and livable,” Hartig said. 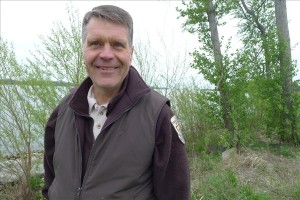 John Hartig, head of the Detroit International Wildlife Refuge for the U.S. side, starting an early tour on a cool day. Photo: Lewis Wallace.

Soft shorelines are a logical part of the strategy: a foot of soft shore can cost a fraction of the price of the cement or steel walls (as little as $15, Hartig says, compared to around $1500 per foot for hard shores), and a lot of the construction work can be done by volunteers or school groups and double as an educational experience. But often the real cost lies in getting rid of what was there before — in many cases, severe industrial contamination.

Wayne and Monroe counties alone have more than 400 contaminated industrial sites, according to the EPA.

“We are the rust belt as they say, and so we have had huge heavy industry here,” Hartig said. “Some of it’s gone, but some of it still remains.”

Water quality has improved dramatically with increased regulation since the 1970s, but cleaning up industrial contamination is a slow, partial process.

For example, the ruddy parking lot at the Humbug entrance is supposed to be the welcome point for future visitors, featuring a fishing pier, a boat dock and a modern information center. But it took nine years just to clean up the so-called Refuge Gateway site and cap the contamination leftover from a solvent factory that used to be on the site. At another soft shore site called the Black Lagoon, remediation from an underwater oil and grease spill took years and cost $9.3 million in federal funds.

Today the Black Lagoon lines a pleasant local park in Trenton, but the Refuge Gateway still looks like a field of crabgrass tucked between some factories.

Hartig says the refuge is still awaiting appropriations from Congress for the planned welcome center, and seeking donations toward the cost of building the pier and boat dock; the refuge has raised more than $2 million towards the latter project, but as of June it was still $750,000 short.

Most of the money for Hartig’s projects is federal, and the refuge has also obtained significant private funding from local industries; Hartig says the refuge’s public-private funding model is generally successful. But the context is one of economic devastation: Southeast Michigan has suffered from the loss of industrial jobs and from the Great Recession, with nowhere harder hit than the city of Detroit itself.

About 25 miles north of the Humbug Marsh in Detroit, hundreds of city parks have closed due to budget cuts in recent years, and in early 2013 the mayor proposed leasing Detroit’s most iconic park, Belle Isle, to the state of Michigan to save money (an unpopular plan that was rejected by the city council). Under recent threat of even more park closures, the city brokered a set of agreements with private corporations to adopt city parks or donate to keep them open.

Those private partnerships may be the city’s new model for public space. The Detroit Riverfront Conservancy, the nonprofit that manages five and a half miles of the Detroit shoreline, is continuously making improvements to the sliver of land in its possession, which includes a river walk and a new state park. And like the Detroit International Wildlife Refuge and now the City of Detroit, the Riverfront Conservancy has relied on corporations to fund its work.

Some community activists have criticized the growing trend towards private or semi-private management of Detroit’s land, contending that the long-term effects will benefit corporations more than the citizens of the city.

But conservancy director Faye Nelson believes the changes to the riverfront can benefit more than just tourists and downtown companies.

“This waterfront is used by the community throughout the region,” said Nelson. “This just isn’t a waterfront that’s used by workers that are downtown.”

Nelson says the project boasts a budget of about $121 million to support development and future maintenance on the east riverfront. And she views riverfront improvement as a key to economic development.

“It provides a huge benefit, beyond quality of life, that is already bringing major dollars, a major economic return to our community,” said Nelson.

However, just a cursory glance along the rest of Detroit’s riverfront reveals that those economic and recreational benefits aren’t reaching everywhere. Just a five-minute drive from the well-kept parks associated with the conservancy, at a city park called Riverside, there’s a big sign at the entrance: “Park closed due to environmental contamination.” 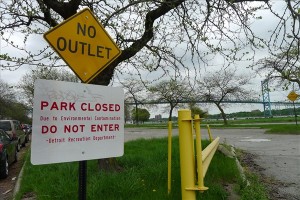 Riverside Park in Detroit. Despite the sign, cars were lined up and the park was full of people fishing on a weekend in mid-May. Photo: Lewis Wallace.

And on a cold May day, this closed, contaminated park was chock full of people out fishing.

“We used to have swings and bathrooms here, but they ain’t got ‘em no more,” said Ruth Williams, a lifelong Detroit resident who’s come to Riverside with her children and grandchildren. Her husband concurred with the general sentiment at Riverside: this park isn’t what it used to be.

“They closed this park down, then they closed a couple more down, got everybody piled into one place now,” Ronnie Williams said.

Another lifelong Detroiter, Kerry Farley, said he isn’t so sure the new riverfront projects benefit him.

“They gotta maintain the [parks] they got first,” Farley said.

Riverside doesn’t have the feeling of forward progress Hartig conveys so clearly when he talks about his shoreline projects; instead it’s a site of apparent disinvestment and bitterness, the result of decades of loss and years of slow progress along the Detroit River, once famed for its productivity, now famed for its funky smells and piles of waste.

But Riverside also reveals just how much people want to spend their Saturday on this river. It’s a source of pleasure and relaxation worth hanging out in a contaminated park.

“Wouldn’t it be terrible if your children had to only see animals in cages or in zoos and petting zoos?” said a fisherman who didn’t give his name. “It would be a shame if you come down here one day, and all this water was gone, and there was nothing out there but muddy bottom and a bunch of rocks and trash.”