PUT-IN-BAY, Ohio — Western Lake Erie’s noxious algae will start to dissipate in about a month and begin its gradual exit like an unwanted guest that stayed too long at the party it crashed.

An early- to mid-October departure of the harmful blue-green algae known as microcystis is not that unusual, even though scientists are getting uneasy about it arriving earlier and staying later as the Earth’s climate warms.

But what they’ve recently discovered is what this unwelcome visitor leaves behind: toxins capable of damaging your central nervous system.

In extreme cases, there may even be enough residue to kill you.

Scientists have known for years that microcystis, the most prevalent type of toxic blue-green  algae in Lake Erie and other parts of the Great Lakes region, poses a potentially lethal threat to humans and wildlife when it peaks.

In the mid-1990s, a U.S. Centers for Disease Control and Prevention team went to South America for a major investigation after microcystin, the toxin in microcystis, killed 75 people at a kidney dialysis center in Brazil. The center’s water-filtration system had broken down, exposing a highly vulnerable group of people to water contaminated by the toxin.

But as the years passed, scientists realized the toxin continues to live outside of the algae bloom, at least longer than previously thought.

The toxin may linger in the water for weeks, possibly months, after the biggest visual, the algae bloom, is gone.

The pea-green goop disappears after fall temperatures arrive and the water cools.

But not necessarily the toxin.

And, she said, nobody has any good data yet on how durable they are.

Jeff Reutter, the lab’s director and head of the National Oceanic and Atmospheric Administration-funded Ohio Sea Grant program, called that a new development.

Not that many people are out swimming or water-skiing in Lake Erie in November.

And, truth be told, shoreline communities have done a pretty good job of tracking microcystis and its toxin. Modern treatment is effective at keeping them out of the public water supply.

But the lingering effect of the toxin associated with microcystis is a potential wake-up call for those who believe there is no problem if you can’t see or smell it. The rank odors and sheer ugliness of toxic blue-green algae keeps most people away from it in the first place – though not always dogs.

Merchant-Masonbrink agreed this makes the communication challenges even more difficult.

Having a hard time getting people to take microcystis seriously? Try telling them it not only moves around, influenced largely by wind direction, but that its concentrations could vary a great deal only a few feet apart and — oh, yes — the toxin they need to worry about could remain hidden in the water long after the algae appears to have gone.

Microcystis has 80 known types of toxins.

Microcystin — LR is the most common and toxic. It has been found in Lake Erie in concentrations that far exceed World Health Organization standards.

At its most intense concentration, it is between DDT and dioxin for toxicity, Merchant-Masonbrink said.

“These are serious toxins,” she said. “These are not to be sneezed at.”

Keep your distance from areas known to have had toxins, Merchant-Masonbrink said.

Also, stick to the fillets of fish you eat. Toxins concentrate in the fish guts, she said. 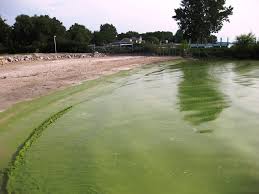 Her comments underscore the need to reduce runoff from crop farms and livestock operations, from sewage overflows and all other phosphorus sources that help algae grow.

Scientists have found the most crucial time to curb runoff is March 1 through April 30, said Gail Hesse, executive director of the Ohio Lake Erie Commission. That commission is a panel comprised of Ohio’s state agency directors.

Scotts, the nation’s largest manufacturer of fertilizer, is based in Marysville, Ohio, northwest of Columbus. Starting this year, it eliminated phosphorus from its lawn care products, Hesse said, although she noted it has not been removed from all products.

Hesse, a former northwest district chief for the Ohio EPA, agreed the lack of testing for Lake Erie toxins from 1995 to 2007 shows how algae threats have been misunderstood.

Microcystis became abundant in western Lake Erie in the summer of 1995 for the first time since the early 1970s, when the United States and Canada began to modernize sewage treatment as directed under the Great Lakes Water Quality Agreement and America’s Clean Water Act.

It has reappeared almost annually with large swaths between Monroe and Sandusky.

Microcystis has been in other parts of the Great Lakes, too, but typically grows more in western Lake Erie because it’s warmer, shallower, has more people and more land-use impacts.

Less is known about an invasive algae from the South that was found in the region a few years ago, lyngbya wollei. It is typically long strands that clump up near the shoreline, including Lake Erie’s Maumee Bay. At high concentrations, it can cause skin rashes, blisters and tumors, Merchant-Masonbrink said.

Not all forms of algae are bad.

Justin Chaffin, Stone Lab research coordinator and senior limnologist, said there are hundreds of algae species in Lake Erie, many of which help produce plankton that supports the food web for fish.

The imbalance can be found across the world. China, Europe and Africa also have algae problems. The common denominator is the release of excessive fertilizers, waste and other nutrients, Chaffin said.

For many species, including microcystis, toxins are released while algae cells die, Merchant-Masonbrink said.

Sunlight helps kill the toxins, but only near the water’s surface, she said.