A rise of global temperatures will release more carbon dioxide from forest soils, according to a new study that includes a look at a Wisconsin forest.

And that increased release of the greenhouse gas could make the climate heat yet even faster.

Scientists at the University of the California Irvine heated by 10 to 20 degrees soil collected from forests in Wisconsin and North Carolina. They discovered that the warming released up to eight times more carbon dioxide.

The study was published June 11 in the online edition of the Proceedings of the National Academy of Sciences journal. 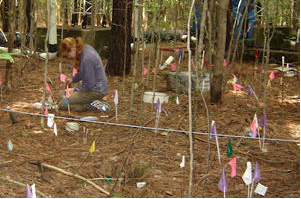 It is the first study that shows that most carbon in the topsoil is vulnerable to a warm weather effect, said Francesca Hopkins, a doctoral researcher at the University of California Irvine and an author of the report.

Carbon dioxide is an odorless gas that helps trap heat in the atmosphere.  It is produced both naturally and through human activities, such as burning gasoline, coal, oil and wood.

“We found that decade-old carbon in surface soil is released to the atmosphere faster when temperatures become warmer,” Hopkins said. That suggests that warming soil could accelerate global warming.

Forest soil contains a large amount of carbon from decaying leaves and roots.

Hopkins and a team of scientists from across the country collected samples of it and tested them in the laboratory.

Samples were collected from the Harshaw Experimental Forest, located on former  private farmland in Rhinelander, Wis.and the Loblolly 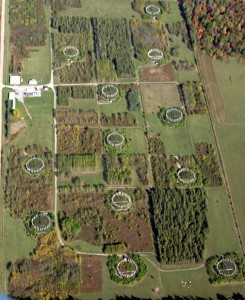 “The sites were chosen because of their rich carbon concentration in the soil and easy access for research experiments,” Hopkins said.

Northeastern woodlands that were once farms fields contain large amounts of the Earth’s carbon in the soil, according to the study.

Climate scientists are concerned that trees and soils could contribute more carbon to the atmosphere than they capture and store.

“Our results suggest that large stores of carbon that build up over the last century as forests recovered, will erode with rising temperatures,” said Susan Trumbore,  professor of Earth system science at University of California Irvine, who led the research team.

Microbes near the tree roots consume carbon and then release it into the air as carbon dioxide, the study says.

The finding is a challenging issue for those looking to limit the release of carbon dioxide to lessen global climate change.

“There are carbon dioxide sources that we can’t control,” Hopkins said. “We can control how much gasoline we burn, how much coal we burn, but we don’t have control over how much carbon the soil will release once this gets going.”

Another report demonstrates that at least initially the increase of carbon dioxide is not necessarily detrimental. It has a temporary fertilizing effect on trees and plants, making them grow faster, University of Michigan researchers reported last year.

The result of that 12-year experiment assumes this effect will temporarily boost the growth of the northern temperate forests, said Zak Donald, microbial ecologist at the University of Michigan. That would make them capture more carbon.

But growth-enhancing effects of carbon dioxide in forests could eventually slow.  Trees roots can fully exploit the total amount of carbon in soil, but it’s unknown how much time it will take for them to reach that limit, Zak said