It’s on the move. 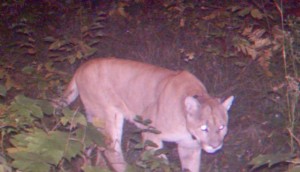 A cougar was spotted in Houghton County, Mich. on Sept. 26. Photo: Michigan Department of Natural Resources

A cougar was caught by a trail camera on Sept. 26 in Houghton County, Mich., and a cougar was spotted by another trail camera in Ontonogan County earlier this month. These sightings, according to Michigan Department of Natural Resources wildlife biologist Adam Bump, are almost certainly of the same cat.

If it is the same cougar that walked past those cameras, then that cat has covered some distance, at least 50 miles from one county to the other.

Farewell, cougar friend. See you on the trail.

6 thoughts on “Cougar makes its way through Michigan”