For years there was great disagreement about the presence of cougars in Michigan, and now one photogenic cat keeps dismissing the naysayers by strutting in front of trail cameras in the Upper Peninsula. 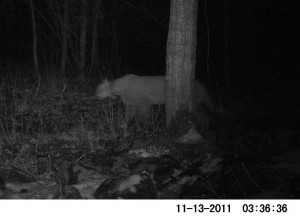 The Michigan Department of Natural Resources confirmed a radio-collared cougar on Nov. 17 caught on camera in northern Houghton County. They consider it to be the same one caught on camera twice before.

“This is the third time this animal has been captured on trail cameras in the Upper Peninsula,” said Adam Bump in a prepared statement. Bump is a wildlife biologist with the Michigan Department of Natural Resources.

“The Wisconsin DNR earlier verified two trail camera pictures of this cat as it passed through Wisconsin on its way to the UP,” Bump said.

The department also verified a set of cougar tracks in southern Keweenaw County on Nov. 20. The department believes the tracks are from the same cougar that was spotted on camera in Houghton County a week earlier.

Since only western states radio-collar cougars for research, the department is still trying to track down where the cougar is from. So far they’ve checked frequencies from South Dakota, Utah and Montana.