Warning: Do not read if you’re a young girl who recently received a response to your message in a bottle. 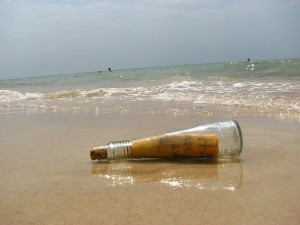 A recent feel good story in The Times Record in Maine reports that a 6-year-old girl and her father sent a message in a plastic bottle down the Kennebec River in Bath, Maine, two years ago.  The girl, Libbi Wallace, recently received a response letter, post-marked from Cleveland, from an anonymous kayaker who paddled upon the bottle.  The responder — who signed the letter only as “Surprised in Cleveland” — said he or she found the bottle while kayaking in Lake Erie.

A Times Record reporter browsed an atlas with the river-littering pair, and the father offered a possible route: St. Lawrence River to Lake Ontario to Lake Erie.  While I didn’t go into journalism to make children cry, I have to point out a couple problems with pop’s reasoning:

View Trace the bottle in a larger map

Although I agree with the father’s comment, “it’s amazing how the currents work,” the flows do usually follow the laws of physics.

Is the small town still giddy from the filming of “Message in a Bottle” there over a decade ago?  Did the bottle hitch a ride in some ship’s ballast water like a determined invasive?

Is “Surprised in Cleveland” really “Loving Father in Bath, Maine?”

But I’m willing to be convinced.

For the sake of aquatic pen pal seekers everywhere, please prove me wrong Echo readers.  Got another explanation for this impressive voyage?

One thought on “Message in a bottle or hoax in a newspaper?”