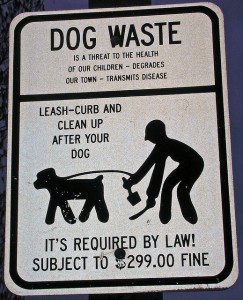 In addition to hefty fines, not picking up after your dog can affect air quality, according to a recent study. Photo: ATIS547 (Flickr)

The fight for clean air in industrial cities has been taken to vehicle exhaust and billowing factories.

Now it’s gone to the dogs.  Or, more accurately, to their poop.

A recent study found that the winter air in Cleveland and Detroit had large amounts of bacteria most likely from dog feces. Researchers from the University of Colorado-Boulder analyzed 108 summer and winter air samples from four Great Lakes cities — Chicago, Cleveland, Detroit and Mayville, Wis.  They checked it for the DNA of common sources of airborne bacteria — leaves, soils, and different types of feces.

They found high levels of bacteria common to dog’s feces in all four cities, but Cleveland and Detroit’s levels spiked dramatically in the winter.

While the team didn’t look at potential health problems, airborne bacteria can cause disease and trigger asthma and seasonal allergies.

“People breathe all kinds of bacteria all the time,” said Jeff Collett, Jr., co-author and professor in the Department of Atmospheric Science at Colorado State University.  “But most airborne particles have been associated with respiratory and cardiovascular health problems.”

Detroit and Cleveland are no strangers to air problems — the two cities ranked 12 and 17, respectively, as worst cities for year round particle pollution in the American Lung Association’s “State of the Air 2011” study.

But while it’s long been known that elevated bacteria are present in city air, little research until now has been done on identifying where it came from.

Dust and leaf surfaces are the main sources in the summer. That’s not true in the winter.

The study didn’t determine why.  One hypothesis is that people are less likely to pick up the animal droppings in the winter months, Collett said.

The difference in the fecal bacteria levels by city, however, may be explained by dog concentration.

Dog populations are typically 37 percent of the human population, according to the American Veterinary Medical Association. The number is estimated to be much higher in Detroit where stray dogs run rampant.  While the number of strays in cities is hard to pin down, the study cited a scrapped reality show on Detroit’s stray dogs that reported more than 10,000 in the city.  Cleveland picked up 4,078 strays in 2010, according to John Baird, chief animal control officer.

But not dog poop bacteria.

The team plans to determine the different airborne bacteria in other cities and create an “atlas of airborne bacteria,” according to Collett.  By finding the bacteria types, and how they got there, the team can then move onto human health impacts.

While the study has a pretty high yuck factor, Collett says people need not hold their breath for fear of inhaling poop.

“The (dog feces) bacteria are not the majority of the particles in the air.  While in the winter it was most abundant, there are many other things in the air.”