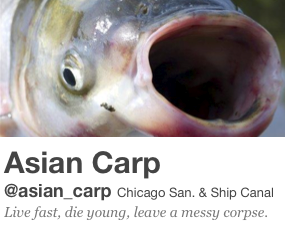 Here’s what we know about Asian carp: They’re ravenous, launch their bodies forcefully out of water and are inching closer to the Great Lakes.

Here’s what we didn’t know: They tell cheesy jokes, like music festivals and are addicted to social media just as much as humans.

Considering all of the negative press and efforts to prevent the monster fish from entering the Great Lakes, Echo was surprised to see @asian_carp Tweeting live and often from the Chicago Sanitary and Ship Canal. He has some 40 followers.

The quick-witted carp lives by the motto “Live fast, die young and leave a messy corpse” and reveals his evil plans to dominate the Great Lakes watershed.

More of his watery Tweets:

Echo caught up with the monster fish after he charged his phone on the electric barrier – it’s good for something, he said.

In addition to revealing his love of music festivals, he said most of his Twitter followers are European carp fishermen.

He’s had some interesting run-ins with an Army Corps of Engineers professional who doesn’t seem to think carp could handle the Great Lakes’ cold temperatures. But that isn’t going to stop him and his buddies from trying to invade.

“It’s crowded in the Mississippi,” he said.

The man behind the carp would identify himself only as a Michigan reporter and outdoor columnist by the name of Chris. He started the Twitter account as a light-hearted way of talking about a serious issue.

To get into the mind of the carp, Chris thinks about what an ugly, bottom-feeder might do while swimming in a canal full of feces.

“He’s got a sense of humor,” Chris said.

*Editor’s Note: Check out more Asian carp coverage with Echo’s Carp Watch feature. And who could forget our carp bombs!