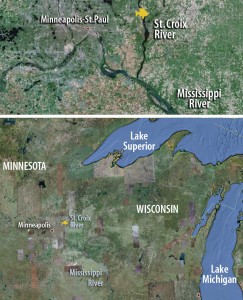 A number of small rivers in between the St. Croix River and Lake Superior are wetlands areas and prone to flooding, which the Army Corps of Engineers identified as pathways to the lakes. Click to enlarge.

Asian carp may be a hop, skip and jump from infiltrating the Great Lakes through Minnesota waterways.

Genetic testing turned up 22 positive hits for silver carp 50 miles upstream of the St. Croix River, a tributary of the Mississippi River, according to test results released late Thursday by Minnesota officials.

“Our immediate goal is to mobilize as much effort as possible to confirm the presence of live silver carp in the St. Croix,”  Tom Landwehr, state commissioner for the Department of Natural Resources, said in a prepared statement. “The results raise the profile and the level of urgency around the Asian carp issue not just for the DNR, but for all agencies, conservation groups, municipalities and river users who have a stake in the health of the St. Croix and the Mississippi.”

An angler fished a bighead carp out of the St. Croix River last April.

No actual carp were found in the latest round of testing by the National Park Service. But results imply there’s likely a heavy concentration of the silver jumpers in that area, said Trilby Becker, water policy coordinator for the National Wildlife Federation.

“It gives us a small window of time to develop a mechanism to respond in emergency aquatic invasive species situations,” Becker said. “If Asian carp pass the St. Anthony Falls dam and access the upper Mississippi, there’s not much stopping them from entering Lake Superior.” 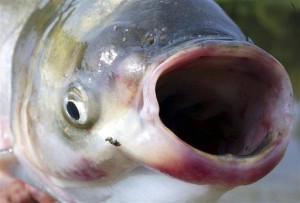 Officials have concentrated efforts to stop Asian carp from entering the Great Lakes in the Chicago Area Waterways System. That region is the focus of political and legal disputes over closing the waterway.

But the U.S. Army Corps of Engineers has also identified 30 potential carp pathways in other states.

Two northern Minnesota waterways in the Mississippi River watershed are acute pathways: the Swan River and its tributary. Both are susceptible to flooding.

The monster fish with prodigious appetites are known to vacuum up food needed by native fish.

The state must stop Asian carp – a catch-all term for several non-native species – before they negatively impact the state’s waterways, Becker said.

“We must intervene at the downstream point that permits the greatest opportunity to prevent Asian carp access to up-stream water-sheds immediately,” David Zentner, national director of Minnesota’s chapter of the Izaak Walton League of America, said in a prepared statement.

An informal Asian carp taskforce of state and federal officials will meet early Friday to discuss the recent developments and coordinate their efforts.

One solution of halting the carp may be to close the two dams.

“We’re calling for an economic analysis and rigorous research into the economic pros and cons of closing the locks,” Becker said. “There’s a lot more at stake than just the Great Lakes.”

Some environmental organizations are asking officials to consider closing this dam and the St. Anthony Falls dam to prevent Asian carp from spreading past the Twin Cities.