The Detroit River shoreline has miles of steel sheet pilings, concrete break walls and cement used to deepen the river and increase flow for safety, navigation and industry.

Manufacturers along the river processed these materials and shipped the final product the same way.

That hard edge is no longer needed for moving freight in certain parts of the Detroit River. But its legacy isn’t so great for river species looking for a place to live, the costs to repair its crumbling or cracking rim and for the eyes of Detroiters. 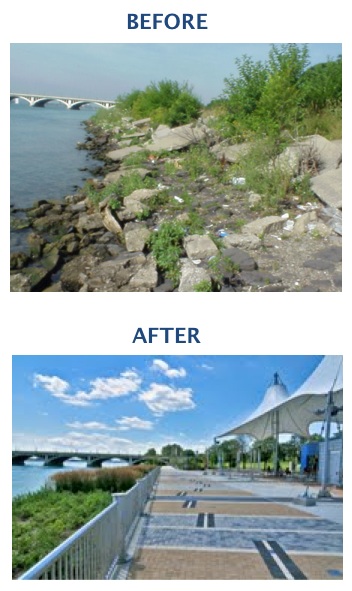 Rising in its place is the concept of soft shoreline engineering like the kind JJR designed and engineered along Gabriel Richard Park’s river edge and in sections of William G. Milliken State Park and Harbor in the Detroit River Waterfront’s East District.

One park area was transformed from a brownfield into a stormwater-treating wetland. The staff removed relics of an industrial past–boat launches, wood structures, train tracks and the turnstile upon which train cars turned after dropping their loads, Sitar said. The staff also found historic storm water connections and drains.

Softening the way we think about shorelines

Here’s how soft shoreline engineering works: In place of concrete and steel, designers put vegetation, stone and other materials that soften the edge while maintaining a stable shoreline.

In 1999, the Detroit American Heritage River Initiative held a binational conference. Attendees created a manual of best practices that drove testing and demonstrations of the technique in the Detroit River area. Thirty-eight projects costing more than $16.5 million was the result.

Each project was approved by the Michigan Department of Natural Resources and Environment and the U.S. Army Corps of Engineers.

Acting as commerce and industry’s backdoor, 31 of 32 miles of the Detroit River shoreline were transformed with concrete and steel, according to a report by John Hartig, U.S. Fish and Wildlife Service refuge manager of the Detroit River International Wildlife Refuge, and Anna Cook, a service biological technician.

“We were able to reduce that hardened and sheeted edge and create more natural habitat,” Doher said of JJR LLC’s work. That’s because freighters don’t unload in the East District anymore.

That right time is when Hartig and his team get to the table early.

“That’s where you get your big win,” Hartig said.

The hard industrial shoreline in the East District was replaced with natural stone and plants, creating habitat for fish and wildlife native to the Detroit River, Doher said. The soft shoreline also cleans stormwater before it flows into the river. 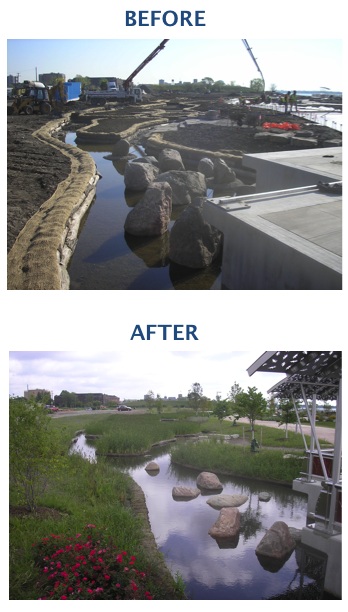 The process is complicated. An orange snow fence served to indicate where old and new soil met, Sitar said. The team brought in clay and created islands on the 5-acre site. Islands were lined with burlap-wrapped logs and wetland plants were placed on top of them.

The roots will eventually stabilize the shoreline as the logs disintegrate, Sitar said. Storm water now enters the wetland area from 11 acres of land in and near the park before spilling into the Detroit River.

Construction was completed in October 2009. Sitar hopes local charter and public school science classes will monitor progress by taking water samples at the top of the wetland and at the discharge site.

Soft engineering is soft on funds

While hard design structures often have a limited life, soft engineering produces living shorelines that can repair themselves.

The technique can’t be used everywhere, but where it is appropriate, the option is a less costly one with multiple benefits, Hartig said.

“It’s an initiative or practice whose time has come.”

Editors note: This is the first in an occasional series of stories looking at soft shoreline engineering.

6 thoughts on “Re-engineering history: Softening the way we think about shorelines”