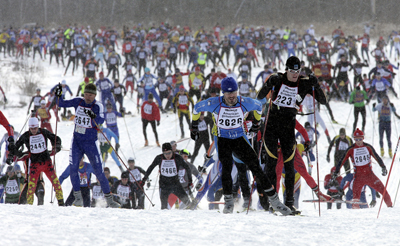 The American Birkebeiner race brings thousands of skiers and millions of dollars to Wisconsin, so the hosts are paying attention to climate change. Photo: Paul M. Walsh

The hosts of the largest North American cross-country ski race are miserly with snow.

“We try to make use of every flake that falls here,” said Ned Zuelsdorff, executive director of the American Birkebeiner Ski Foundation in Wisconsin. “You never know when it’s going to disappear.”

That is increasingly difficult as race organizers brace for erratic weather prompted by global climate change.

In February, a record 8,000 skiers raced in annual Birkebeiner events, including the 33-mile race from Hayward to Cable, Wis. This year’s skiers enjoyed some of the best snow Zuelsdorff said he has ever seen.

That’s in stark contrast to 2000, when the race was canceled because rain turned the trail to slush.

In fact, the race has been canceled or shortened three times in the past 10 years due to warm or wet weather.

What’s worse, climate models predict warmer winters and more intense rainfall for Wisconsin. Zuelsdorff knows that because he sits on the advisery committee of the Wisconsin Initiative on Climate Change Impacts, a collaboration between the University of Wisconsin-Madison and the state’s Department of Natural Resources.

“The data that they showed makes me very worried,” he said.

The initiative is designed to help Wisconsin officials and businesses adapt to climate change and anticipate its effects. That’s important because climate change is already underway, said John Magnuson, co-chair of the initiative’s science council.

Even the most ambitious plans to reduce heat-trapping greenhouse gas emissions can’t change that.

“There’s no way that we’re going to escape having to deal with the effects of global warming,” Magnuson said. “I’m not sure if that’s pessimism. It sort of strikes me as realism.”

Wisconsin may be ahead of most Great Lakes states in bracing for climate change, although a recent federal grant will bring some new help for the region.

Sewers and bridges are built to withstand a region’s most intense storms as determined by rainfall records. But the records Wisconsin’s engineers have been working with are outdated, Magnuson said.

They don’t include stormy weather of the past 30 years. Even worse, the records were heavily influenced by very dry years in the 1930s, he said. That means structures built based on old records might not stand up to the wetter weather that could be on the way.

Now Wisconsin’s hydrological scientists are updating the records to include the past few rainy decades, Magnuson said.

“What that’s going to do immediately is to increase the expected return frequencies of some of these large storms,” he said.

To finish the job, scientists need to account for the future uptick in storm intensity that climate models predict. That’s where Wisconsin’s climate change impacts initiative should be able to help, he said.

Climate change adaptation help is on the way for the other Great Lake states, too.

Last month, the Great Lakes Sea Grant Network got a $25,000 grant from the National Oceanic and Atmospheric Administration to develop a climate change adaptation curriculum for cities, watershed councils and other community planners.

The Sea Grant program will partner with NOAA and the University of Michigan and work with coastal communities to find out where climate change should influence municipal planning, said Michelle Sturtevant, a regional Sea Grant outreach specialist for the Great Lakes.

“We’re hearing from people that, ‘It sounds like we need to be doing something about climate change, but we don’t have a clue what,'” Sturtevant said. “So this is trying to get some tools into people’s hands.”

The program will could cover topics like how much dredging harbors will need and how climate change could affect tourism, she said.

For Zuelsdorff and the Birkebeiner, winter tourism is big business.

“The race conservatively brings $3 million to our little town and the communities around it just over the weekend,” he said. “People have moved here, have a second home here because of the trail.”

That made the cost of adaptation — a new trail less susceptible to warm and wet weather that cost $110,000 to build and thousands more annually to maintain — easy to swallow.

While the managers of a ski trail might be an easy sell on climate change adaptation, state agencies and cities are buying into the strategy’s importance, too, Magnuson said

But the early adopters will have to be patient.

“We don’t have a whole lot of hard information yet to give them,” he said. “But we want to be in this position to help people like this that are trying to make day to day economic decisions about their own livelihood.”