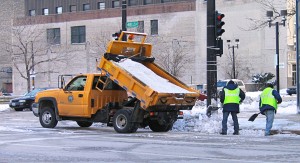 The U.S. Geological Survey examined approximately 100 streams in 19 northern states for road salt and other sources of chloride.

Of the 52 streams tested in Great Lakes states, a quarter had chloride levels that exceeded federal standards designed to protect drinking water supplies.
Levels higher than 250 milligrams per liter give water a salty taste, according to the study.

Excessive chloride can also be harmful to fish, plants, insects, worms and macro-invertebrates, said Kevin Cronk, a monitoring and research coordinator for the Tip of the Mitt Watershed Council, a northern Michigan group that advocates for water quality.

Chloride has increased in all lakes and streams in northern Michigan, Cronk said.

“If they are seeing levels that high, they must be talking about a highly urbanized area,” he said.

Most streams that tested high are where road salt and other chemicals are used to deice roads, according to the study.  Winter road safety accounts for 40 percent of the use of salt in the United States.

Highway officials reported using from as little as 10 tons to as much as 30 tons of salt for one mile of road lane in all of the states surveyed.

Other sources of chloride in streams are landfills, drinking and wastewater treatment and natural sources.

Chloride is a good indicator of human activity and population increases, Cronk said. High levels may also mean harmful chemicals leaking from cars are also ending up in streams.