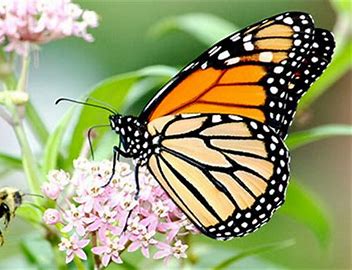 In July, the International Union for Conservation of Nature listed the monarch butterfly as endangered for the first time in history. Potter Park Zoo in Lansing, Michigan, first installed a pollinator garden in 2018. With the recent news of the monarch’s decline, the zoo is encouraging people to build wildlife habitats of their own.

Findings by researchers at the University of Michigan predict that warming temperatures may result in increased seasonal allergies. They also found that pollen emissions could begin 40 days earlier than normal, with allergy season lasting an additional 19 days. That’s in contrast with a normal allergy season that typically lasts 10 to 30 days.

August: Dibs on the Water

As anyone who lives in Michigan knows, March and April are the wet months. But like so many things that Anyone knows, this is only about half true. The amount of precipitation (the water in rain and snow) doesn’t change much from month to month in Michigan.

A federal judge has placed the ex-president of a Fort Wayne environmental services company – described in her lawyer’s sentencing memorandum as “kind, generous, hard-working and honest” and a “huge source of inspiration” for her children and grandchildren” – on probation for two years for illegally storing hazardous wastes and falsifying a document.

Protecting your place: one man’s tribute to Northern Michigan