This spring, Michigan’s maritime museums are striving to rise above last year’s calamity caused by the COVID-19 pandemic.

Although revenues were down due to restricted capacity limits and forced closures, maritime museums aim to push forward, officials say.

Lisa Craig Brisson, the executive director at the Michigan Museums Association, said she believes maritime museums are likely to survive the pandemic better than a lot of others.

“In my opinion, they probably have fared better than other types of museums,” Brisson Craig said. “A lot of them are considered outdoors museums, and many are located in tourist areas.”

They’re dedicated to the preservation of Great Lakes maritime history and educating visitors about water navigation, ships and the physical display of objects such as anchors.

According to the American Alliance of Museums, museums contribute $50 billion to the U.S. economy each year.

“Every day is a good day to visit a museum,” Craig Brisson said.

“Museums hold a story of who we are as a people. In Michigan, we are a water people, and it is how we developed. Every industry is possible in Michigan because of our water,” she said. 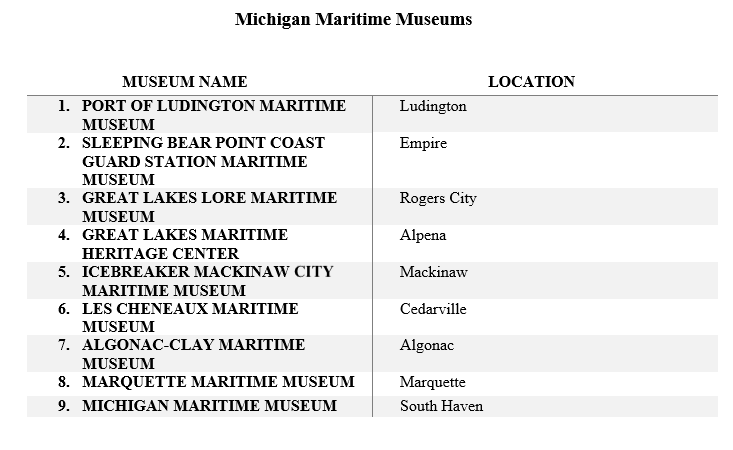 The state has many museums that deal with maritime history, she said, with nine of them counted in the association’s census.

The Marquette Maritime Museum is closed but plans to reopen May 11. Its normal season is from mid-May to mid-October, director Hilary Billman said.

“Being closed has nothing to do with the pandemic as we are always closed in the winter because of reduced tourism and complications with keeping open in the winter,” she said. Last year it waited until June 16 to open.

Billman said a traditional reopening ceremony or reception won’t take place due to the pandemic.

“The museum has not significantly increased fundraising efforts, but our monetary donations have increased for 2020 and 2021. Our goals include returning to our three lighthouse tours a day. Last summer we had to reduce them to two a day, which resulted in loss of revenue,” she said.

The Port of Ludington Maritime Museum saw an 85% loss of revenue last year due to the pandemic. Despite that challenge – and with the help of its supporters – the museum plans to re-open on May 1.

“Thanks to a generous and supportive community, we raised funds to help sustain our museums,” said Rebecca Berringer, the executive director of the Mason County Historical Society, which manages the museum.

In addition to fundraising, the museum reduced its operating budget by about 30%, Berringer said.

“We do have a new Armistice Day exhibit that was installed at the very end of last year,” she said.

That exhibit educates visitors about the deadly 1940 Armistice Day storm. Among the drastic weather changes that took place with that storm, it also affected countless individuals.

According to Ashley Deming, the director of education and administration at the Michigan Maritime Museum, her institution also hopes to recover from its “significant financial losses last season.

“Much of our revenue is generated in the summer months and aboard our on-water fleet,” she said.

She said that the museum cut costs in whatever areas that it could to remain open.

“While we chose to operate, we did so at a 50% capacity on our boats, focusing on private charters instead of individual ticket sales. We also had to cancel all of our events — many of which are annual fundraisers,” she said.

Losses are ongoing, she said.

According to Deming, the museum created a $100,000 COVID-19 relief fundraiser to help cover operational costs.

According to Deming, the expanded campus will offer more outdoor waterfront spaces to enjoy this year. and its tall ship Friends Good Will and river launch Lindy Lou Tulip Time will be in Holland on May 1-9.

The museum has reached over 50% of its goal, Deming said.

“We have geared back up for 2021 and feel confident that we are on our way to raising the remainder of the funds,” she said. “We feel that the project itself will help in the economic recovery of our community and region at a critical time.”