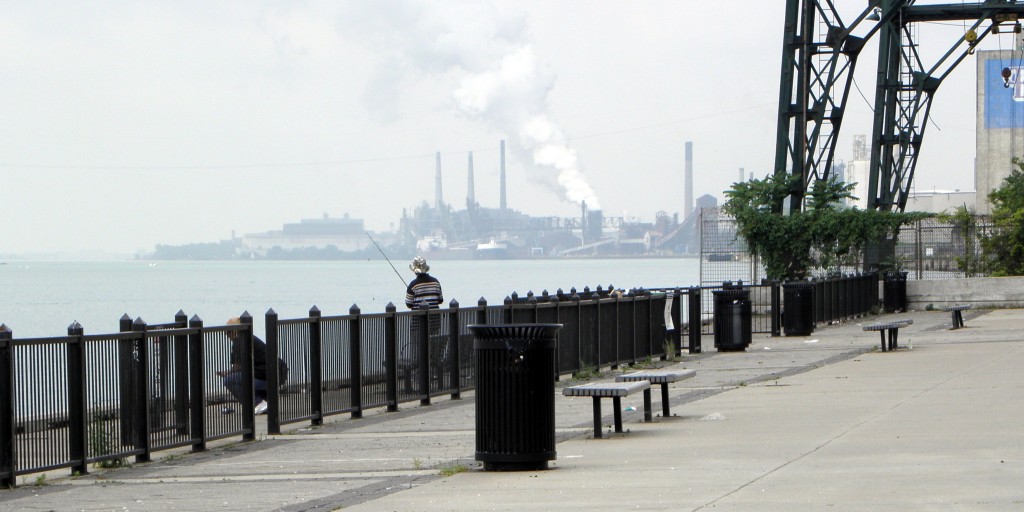 Fishing along the Detroit River near the Ambassador Bridge, looking back at Rouge pollution. Photo:Karen Schaefer.

Join us as we explore Detroit’s waterfront: Challenges and opportunities. This series is produced by Current State and Great Lakes Echo with support from the Great Lakes Restoration Initiative.

So far we’ve looked at lucrative walleye fishing on the Detroit River,  daylighting streams and rebuilding shorelines. Today and next week we explore the Rouge River.

The Rouge River in Detroit is one of Michigan’s — and the Great Lakes’ – most polluted waterways.  Generations of air and water pollution from heavy industry near the mouth of the river contaminated its sediments and made it unsafe for fishing.  Upstream, dense urban populations have overwhelmed sewer and storm water systems, sometimes dumping raw sewage into the Rouge.

The result is a river in trouble. Today, independent producer Karen Schaefer  explores the river’s challenges. Next week: Reason for hope.

Listen to the story here…

SCHAEFER:  It’s a steamy summer day at Belanger Park in greater southwest Detroit, and a score of fishermen are hauling in silver bass from the Detroit River as fast as they can catch them.  Posted on railings along the river are signs warning fishermen not to eat the fish more than once a week.  Kevin Brown, a lifelong resident of nearby River Rouge, says he’ll eat his catch from the Detroit River — but he won’t fish in the Rouge.

BROWN:  Too many factories around there.  Not that I’d keep ’em, I don’t think I’d even want to touch ’em. 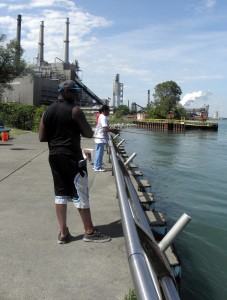 Subsistence fishermen at Belanger Park in Ecorse have to contend with air pollution from surrounding factories.Photo: Karen Schaefer

SCHAEFER:  Brown is right that it’s not safe to eat most fish from the Rouge River, which empties into the Detroit just a few hundred yards upstream from the park.  Industrial chemicals like polychlorinated biphenyls – better known as PCB’s — are still abundant in the sediments of the Rouge from generations of manufacturing.  In fact, this park near the river’s mouth is surrounded by industry — from the smokestacks of steel mills and power plants to acres of oil storage tanks and vast piles of coke and iron ore.

KEVIN BROWN:  If it was me, I wouldn’t live here.  Even the smoke from Edison…it’s ridiculous.  I’ve lived here for 29 years and I don’t think it’s ever going to change, I really don’t.

SCHAEFER:  The Rouge’s industrial history began with the making of metal products like stoves from ore shipped in from the upper Great Lakes.  That nexus of raw materials, shipping, manufacturing, and labor made Detroit an ideal location for the nascent auto industry.  By the time Henry Ford opened his Ford Rouge plant in 1928 on 2-thousand acres along the Rouge River, the Motor City was already well on its way to becoming the center of U.S. auto making.  But along with industry and jobs came pollution.

ORIN GELDERLOOS:  You know, anybody that owns an automobile, anybody that lives in a manufactured house with building materials, is really responsible for the pollution that is in the Rouge River.

SCHAEFER:  Orin Gelderloos has been teaching environmental studies for almost 40-years at the University of Michigan in Dearborn, just a few miles up the Rouge on Henry Ford’s former estate.  Gelderloos says in the decades before environmental regulation, all kinds of pollutants were going straight into the river.

GELDERLOOS:  There were the waste materials like oils that came out of the plants, sludge materials, slag materials that could get dumped into the river.

SCHAEFER:  With the passage of the 1972 Clean Water Act and industrial regulation, much of that pollution was curtailed.  But oil spills still occur.  In 2002 a waste oil hauler illegally dumped as much as 250,000 gallons into the Rouge, prompting a $7 million clean-up. In addition to industrial pollution, the Rouge faces an on-going challenge from overflowing urban sewage.  Here at Detroit’s sole waste water treatment plant — the largest in the Great Lakes – thousands of herring gulls are nesting along the lagoons.  Robert Burns says this plant has long been a major source of pollution.

BURNS:  Back in 2009 to 2011, the plant was out of compliance and was basically backing up like a toilet.

SCHAEFER:  Robert Burns is the Detroit Riverkeeper, a non-profit group that monitors threatened rivers.  He says at one time the city had 78-outfalls where raw sewage could spill directly into the river during heavy rains.  Many have been shut down, but he says the sheer volume of water this plant must treat makes it difficult and expensive to fix.

BURNS:  You’ve got to understand that the Detroit waste water treatment system services 3.8 million people and dozens of communities around the metro area.

SCHAEFER:  In addition to polluted water, air pollution from industry, and from the thousands of cars and trucks that daily cross the Rouge along I-75 into Canada, is a another major threat to residents and the river.  At the mouth of the Rouge lies Zug Island. 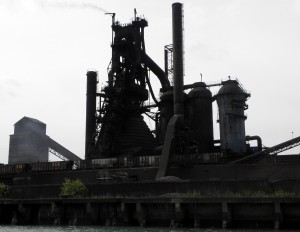 BURNS:  We’re passing the DTE Rouge Power plant on the south side of the river and Zug Island on the north side.  And the large coals piles belong to EES Coke, a large coke-making facility, which leases property from US Steel, which runs the steel mill on the other end of the island.

SCHAEFER:  Criss-crossed tangles of iron scaffolding, pipelines, even the sheet metal that lines the water’s edge are black with generations of coal dust.  Looming above us is the massive, sooty beehive furnace that turns coal into coke for the making of steel.

CLINTON COOPER:  I even one time worked in the mill down on Zug Island.  I know the pollution first hand.

SCHAEFER:  Clinton Cooper is a lifetime resident of River Rouge.  These days he owns a small clothing store on Jefferson, the city’s main thoroughfare.

COOPER:  You can go in there white and come out my color [laughs].  I know this one winter, the snow down there turned orange from the pollution.  And I think that’s the reason why a lot of the sickness is so prevalent down here, a lot of the asthma.  My grandboys got asthma.  A lot of people have a lot of symptoms.

SCHAEFER:  According to the Michigan Department of Community Health, Detroit adults suffer from asthma at rates 50-percent higher than the rest of the state.  And Detroit has the largest population of children with asthma in the country.  Cancer is also a concern for many residents.  Charles Stokes is a community organizer with Detroiters Working for Environmental Justice.  He says a few years ago, a public campaign demonstrated just how many residents here have been diagnosed with cancer.

STOKES:  Everyone in the community who had cancer, some form of cancer, was to put a yellow cross on their lawn.  And on average it was every other house.

SCHAEFER:  Cancer, asthma, sewage, and industrial pollution — the Rouge and its residents face many challenges.  But as bad as it is, many who live here believe the Rouge can — and must — be saved.   For WKAR and Great Lakes Echo/For Current State, I’m Karen Schaefer in Detroit.

Next week in our series, Karen Schaefer explores what the community is doing to revive the Rouge River.

One thought on “Detroit’s water renaissance: A river in trouble”