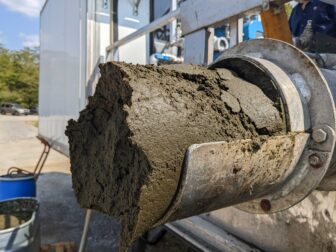 The algae harvester spits out a solid algae cake that can be repurposed as fuel, shoe foam and fertilizer. Image: Will Lovins, AECOM.

The Ohio Department of Natural Resources (DNR) and Environmental Protection Agency have demonstrated a new technology designed to reduce harmful algal blooms in lakes, including Lake Erie, which have been plagued by eutrophication.

It’s part of a wide range of efforts on both sides of the Canada-U.S. border to address the threat of Eutrophication on the Great Lakes and other inland bodies of water. 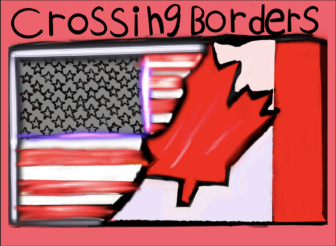 Eutrophication occurs when a lake has too many nutrients, such as phosphorus and nitrogen.

Plant life booms in lakes with a lot of nutrients, which initially sounds like a positive.

But excess nutrients and plant growth can suffocate aquatic animals by removing oxygen from the water, according to the U.S. Geological Survey.

One common result of extra nutrients is harmful algal blooms.

Algae are simple plants that typically look like flecks of green in the water. A harmful bloom occurs when algae produce toxins that sicken other living things, including humans.

The demonstration of new algae harvesting technology occurred in mid-September at Harsha Lake, an important source of drinking water for Clermont County.

The technology, called hypernucleation flotation technology, physically removes algae from bodies of water. It was developed by the Dallas-based engineering firm AECOM.

Dan Levy, the national director of algae for AECOM, said the weeks-long test at Harsha Lake appears to be a success. Initial findings show that phosphorus in the water dropped below detectable levels.

The technology works by skimming the water or taking in water from a specific depth in a lake and physically separating the algae out of the water. The result is a solid clump of biological material Levy calls algae cake.

Levy said an important facet of AECOM’s development of the technology was that it be sustainable.

The algae cakes can safely be sent to a landfill, but there are other uses for them.

For example, the algae can be pressurized into liquid crude oil and used as fuel.

Levy said AECOM is working with the U.S. Department of Energy to make algae cakes into a viable energy source.

Algae products are also a way to replace plastics.

“There’s about 100—150 shoe manufacturers that are currently using algae in their production of the foam of their shoes,” Levy said.

Sarah Macy, an environmental program administrator at the DNR’s Division of Parks and Watercraft, is the project manager for the Harsha Lake demonstration.

She said the test was particularly important for Ohio because its algae problem is different from the problem in other locations where the harvester was used in the past.

“Our typical algal blooms are more dispersed in the water column, or even occur below the surface,” Macy said. “In the pilot studies for this technology, a lot of those algal blooms were surface level, so their technology was taking water in from the surface.”

Having algae mixed into the water meant the developers had to reframe the way they designed the harvester.

Levy said the harvester is meant to be adaptable.

A potential concern with using technology like the algae harvester is cost. One harvester costs around $1 million.

Levy said the price is elevated in part because the machines aren’t produced at a commercial scale.

However, he said harmful algal blooms are a complex problem that requires innovative solutions.

“Without water, we don’t have life,” Levy said. “I know a lot of people ask about the cost, but what’s the cost of not having water?”

This alga harvesting technology is one of 10 potential solutions to harmful algal blooms identified by the H2Ohio initiative, which promises cleaner waters for the state.

Other aspects of H2Ohio include reducing phosphorus in water, creating wetlands and updating water and sewer infrastructure.

The EPA completed its final assessment of technology proposals in September and is preparing for the next steps of removing harmful algae from Lake Erie.

Harmful algal blooms are a big problem on multiple Great Lakes, such as Lake Erie and Lake Ontario.

Nitrate is a form of the nutrient nitrogen. Researchers who conducted the study warned about the risks of nitrate increasing eutrophication in Lake Ontario.

Catherine Eimers, a professor in the Trent University School of the Environment, worked on the study and said it was part of a larger project investigating why nitrate levels in streams are changing.

“There have been very dramatic changes in agriculture in southern Ontario over the last 40—50 years coincident with the time period when nitrate levels were changing in streams,” Eimers said. “By agricultural changes, I’m talking mostly about agricultural intensification.”

Eimers said what’s happening in southern Ontario with agriculture is occurring in much of the world as well.

“We’re trying to get more production out of a shrinking agricultural land base,” Eimers said.

She said the results of the study are important for showing the relationship between intense agricultural practices and higher nitrate levels in streams.

“Nitrate has not received the same level of concern in the Great Lakes as phosphorus,” Eimers said. “It’s still below water quality thresholds, so most people think ‘no big deal.’”

However, Eimers warned that nitrate levels are on the rise and one reason for concern is that there are still harmful algal blooms in the Great Lakes, even as phosphorus has declined in some areas.

Many of the technologies identified by theOhio EPA for addressing harmful blooms focus exclusively on phosphorus reduction.

Eimers said she hopes research like hers shows that solutions for harmful algal blooms should also include reducing nitrogen.

H2Ohio has over 110 projects to address water quality problems, including the test of the algae harvesting technology.

The DNR also works on restoring wetlands to absorb extra nutrients before they ever reach bodies of water.

Macy and DeNoewer both emphasized that the DNR recognizes the need for many tools, natural and artificial, to address water quality problems.

“Access to clean water should be something that’s a right to all Ohioans,” DeNoewer said. “That’s what we’re trying to fight for.”