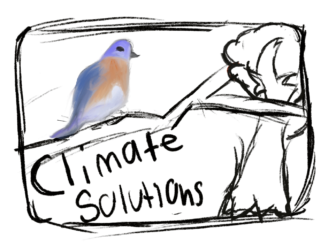 The goal to be a carbon-neutral economy was laid out in a 2020 executive order that also created the Council on Climate Solutions.

The Whitmer administration’s newly released MI Healthy Climate Plan would generate 60% of the state’s electricity from renewable resources, phase out all remaining coal-fired plants by 2030 and build infrastructure to support 2 million electric vehicles on the roads by 2030.

“The companies that signed this letter know that climate action and statewide strategies are not only an economic opportunity for the state, but also a business imperative for them,” said Deana Dennis, the senior manager of state policy at Ceres.

Ceres is a Boston-based nonprofit that advocates for sustainability by working with investors and the companies that initiated this letter.

In Michigan, the organization works with companies to advocate policies to achieve a carbon neutral economy, which would reach zero net emissions through carbon offsetting practices and projects.

“We’re hearing regularly from our companies that they need supportive policies at both the federal and state levels that will help achieve their climate pollution targets,” she said.

It’s also important that these businesses’ goals be achieved as equitably and cost-effectively as possible, said Dennis.

Dearborn-based Ford is taking action to reduce emissions from its operations, according to its website. Previously, the company installed LED lights throughout its plants, updated its painting operations and reduced its emissions by 15.1%.

Ford plans to achieve carbon neutrality by 2050 and use 100% local renewable energy in all of its manufacturing by 2035, according to its website.

Dennis said the companies that sent the letter have ambitious climate goals and know they need to ramp up their own efforts and advocacy work.

“That’s why they want to see Michigan take the lead on statewide strategies, such as through the governor’s MI Healthy Climate Plan,” she said.

The plan’s goals include developing new clean energy jobs by putting the state on a path towards becoming carbon neutral by 2050. It also proposes to reduce emissions from heating homes by repairing and improving buildings, triple the state’s recycling rate to 45% and cut food waste in half by 2030.

The businesses’ letter to Whitmer said, “We are committed to locally sourcing our purchases, including agricultural inputs, both in support of our local economy and in an effort to reduce transportation.”

Brewery Vivant in Grand Rapids signed the letter “to show that businesses are in support of the government taking action to address climate change,” said Kris Spaulding, who owns it and Broad Leaf Brewery in Kentwood.

They are the first microbreweries in the world to be certified in Leadership in Energy and Environmental Design, or LEED, through their efforts to minimize waste and energy use.

The two microbreweries are also committed to reduce greenhouse gas emissions by 50% and energy intensity over the next decade, according to the letter.

The resort has opened walkable and bikeable grounds, provided free electric vehicle charging for guests and invested in other energy-efficient infrastructure such as LED lights and energy-efficient water pumps.

“Respecting the environment is one of our core values, and we strive to ensure our resort is committed to more sustainable solutions,” the company said in the letter.

The signers are from diverse business sectors, and Dennis said one goal of Ceres is to show unified support from businesses.

“The state needs to consider sector-wide strategies,” she said. “That includes the power sector, how we generate electricity. That also includes transportation, which is nationally the sector with the highest amount of emissions.”

Spaulding said, “There is often a feeling that businesses are opposed to any additional regulation, but without us, we as a greater society won’t be able to tackle this pressing issue.”