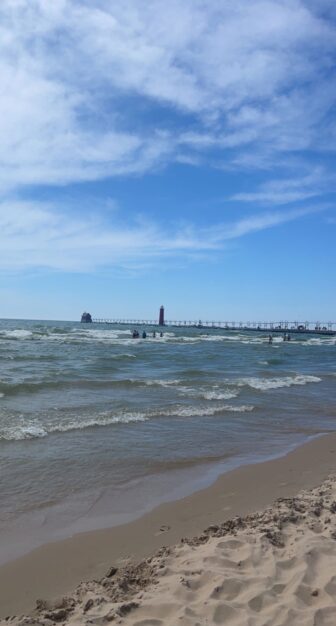 Breathing in Lake Michigan’s fresh lake breeze could cause major health concerns such as asthma.

High fossil fuel emissions are traveling from coastal cities by lake breeze to areas surrounding Lake Michigan, according to a Wisconsin study recently published in the Atmospheric Environment Journal.

The redistribution of polluted air results in an extreme concentration of ozone, a problem in cities across the world, said Patricia Anne Cleary, a chemistry professor at The University of Wisconsin, and an author of the study. High ozone is linked to high levels of industrialization, where the air quality is often poor.

Lake Michigan is a high ozone area of concern because of Chicago and Milwaukee, Cleary said. Their emissions get sucked into wind tunnels blowing primarily onto Wisconsin’s coastal regions of Lake Michigan, Cleary said.

Regions 30 miles off the Lake Michigan coast are subject to a polluted lake breeze that contaminates air quality, Cleary said. Their toxic reach varies depending on the weather.

The health concerns associated with breathing high ozone air are alarming and include an increased risk of premature death, according to a Yale study.

The primary concern of breathing high ozone levels is an increased risk of inflammation in the airways and aggravation of lung diseases such as asthma, according to the Wisconsin study.

To avoid these health concerns, Cleary recommends staying inside or avoiding areas during high pollutant episodes as much as possible.

You can sign up for air quality alerts on your phone or computer through websites like AirNow that will inform you when areas around you are experiencing high pollutant episodes.

High pollutant episodes can occur from the burning of fossil fuels but can also occur from natural disasters such as wildfires, said Charles O Stanier, a professor of chemical and biochemical engineering at the University of Iowa, and the author of Overview of the Lake Michigan Ozone Study 2017.

Ozone levels are particularly worse from May through September, Stanier said. This is because ozone is made of sunlight, water vapor, volatile organic compounds, and nitrogen oxide. In the summer months, high temperatures cause these components to react at an accelerated rate, producing more ozone, he said.

To prevent ozone growth, Cleary recommends that people reduce their carbon emissions by carpooling, walking, biking, and limiting driving cars that run on gas. She suggests other forms of transportation such as public transit.

On top of limiting individual carbon emissions, voting in favor of policies that set limits and reduce carbon emissions is even more vital for maintaining clean breathing air.

Policies like The Clean Air Act of 1963 have been the most impactful legislation for reducing carbon emissions, Cleary said. This act set limits on the amount of fossil fuels that could be emitted and has significantly improved air quality.

Despite a massive decline in fossil fuel emissions since 1963, air pollution remains a top issue. Climate change has led to an increase in wildfires which has drastically decreased air quality, making the need for clean air even more vital, Cleary said.

By reducing carbon emissions as much as possible, we can prevent further pollutants from contaminating the air we breathe, Cleary said.

One thought on “Lake breeze can be harmful to health”