February is the dead of winter. It’s been cold for weeks, it’s still cold, and it’s going to be cold for many more days before spring arrives.

Inside our homes, things are warm and lively – soup is simmering in the kitchen, the houseplant on the windowsill is blooming, and your favorite jazz is playing. When you look out through the window, the only things that you see moving are cars, little bubbles of warmth in the wintry landscape. It’s easy to think of the February landscape as lifeless. Even the language we use – the dead of winter – supports this idea.

You might object that the “dead” in “dead of winter” doesn’t mean lifeless, but simply means absolutely, like “the shot hit dead center,” or “he was dead right.” Sure, that’s possible, but then why don’t we ever talk about a dewy May morning as “the dead of springtime,” or a baking August afternoon as “the dead of summer?” No, I think you have to concede that we say “dead winter” to mean both absolutely winter and the part of the year with no life.

But a closer look shows that nature is very much alive, even in February’s coldest days. To begin with, a lot of what seems to be dead is just sleeping. Many plants and animals go dormant in the fall, only to awaken when temperatures rise or days lengthen with the arrival of spring. You can see for yourself just how lightly they’re sleeping by cutting some branches of a flowering tree or shrub and bringing them indoors into the warmth. Placed in a vase of water, these cuttings will awaken and bloom in a week or two. Forcing some cuttings is a pleasant late-winter activity, and a cheery reminder that spring is coming, even when it is still gray and sleeting outdoors. Forsythia, apricots (my favorite), plums, cherries and quinces all are good subjects. 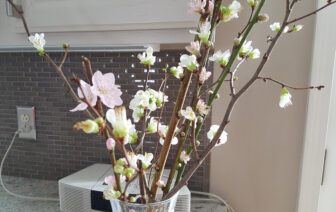 Plum and apricot blossoms forced to life in the dead of winter. Photo credit: Judy Bondus.

Other plants and animals don’t need any forcing, because they’re already awake in February to the prospect of spring. If you pay attention, you’ll hear tufted titmice and other eager winter resident birds singing, setting up their territories for the upcoming spring. Great horned owls may even be incubating eggs by the end of February.

And it’s not just the birds. Though most of our plants are still asleep, skunk cabbage may already be blooming by the end of February. This plant lives in marshy spots kept a little warm by seeps and springs. It is one of few plants that heat their flowers, which can be 20-60 degrees above the air temperature, and can melt their way right through the snow. The plant’s little furnace keeps its flowers from freezing. Along with the plant’s pungent odor, the warmth of the flowers probably helps to attract its pollinators, insects that also woke up early to get a start on spring. 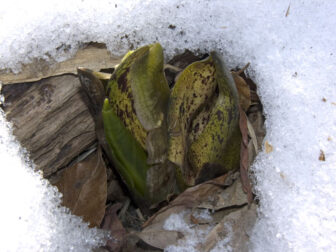 A skunk cabbage flower melting its way through the snow. Seon7376@Naver, from Wikipedia.

Then there are animals that have been active all through the winter, which you can see if you venture outside. The woods and fields seem empty compared to summer, but once you get out and look, you’ll see plenty of birds, including some northern birds that come south to Michigan for the winter. If you want to see these birds, including such treats as snowy owls, siskins, and Lapland longspurs, it’s best to get out in the dead of winter.

Although you may not see many mammals, tracks in the snow show that they are busy when you’re not watching. One of the pleasures of winter walks is seeing tracks of animals that you rarely see in person. I’ve seen only two foxes in my neighborhood in five years, but I often see their tracks – foxes are always around, but are stealthier than I am.

If you look closely, you may even see some of the invertebrates that are active in February. Snow fleas (see the photo) sprinkle the February snow like ground pepper, and pile up in footprints. These tiny creatures are not fleas, and do not bite, but got their name because they hop like fleas. Seen under a microscope, they are endearingly cute (they’d make a great stuffed animal or Disney character.) Snow fleas are able to stay active right through our winters because they make their own antifreeze. 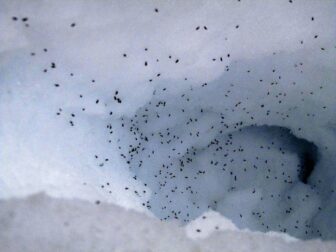 And as crazy as it sounds, February is the hottest time of the year for winter stoneflies. These insects have been feeding on fallen leaves in our streams since last fall, and February is the time for them to emerge and mate on the snow-covered stream banks. It’s too cold for them to fly, so the males and females trundle around on the snow, exchanging sweet nothings (“Did anyone ever tell you that you have beautiful tarsi?”) by drumming on the ground with the tips of their abdomens.

It’s true that February isn’t as riotously alive as May, with flowers everywhere and singing birds in every tree, but it’s far from dead. We just need to get out of the tropical cocoon of our house to appreciate its subtle vitality.

Other essays in this series that are published or upcoming: