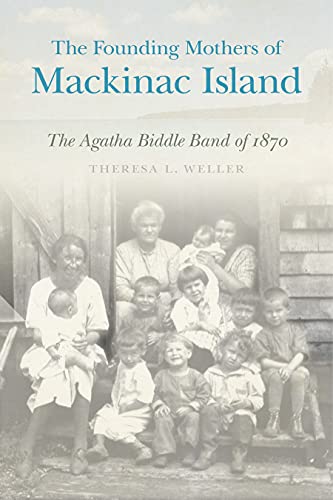 What started as personal research for Theresa Weller to find more about the Anishinaabe name of an ancestor turned into a book, “The Founding Mothers of Mackinac Island: The Agatha Biddle Band of 1870.”

It tells the history of the Agatha Biddle Band, a band of primarily Native American women who lived on Michigan’s Mackinac Island in the 1800s.

The band was a unique Native and Metis community because it was composed of 66 women, and eight men. It was highly unusual for a band to be majority female. Furthermore, the women were unrelated to one another, which was also unusual at the time.

They formed their band because they were all owed annuity payments from the U.S. government for land given up in the 1836 Treaty of Washington, D.C.

Weller tells the genealogies of families in the band and gives readers insight to what life was like for them and others on Mackinac Island during the nineteenth century.

“It started that I was just collecting the annuities and wanted to find out what my ancestor’s Indian name was, and it just blossomed. I thought that there’s so many that are related to people on Mackinac Island that I should keep going with it,” Weller said.

In the preface, Weller says that her purpose in writing the book “was to give the Sauvages a name. Who were these women? Where did they come from? What were their lives like?” Sauvages is a French word meaning wild or natural.

Weller used records of the annuity payments to research who belonged to the band.

“The writing process started with me making spreadsheets of all the various annuities I had and trying to compare them. But there were so many gaps in between,” Weller said.

Weller was able to obtain records from the Mackinac Island Genealogy and Family History for 1858-59. These years were important because 1858 was the last year when the women’s names for annuity payments were written in their own Indian names.

After that, annuities were written with the names of their husbands.

Weller said she found a lot of interesting stories about the women and that people were extremely generous giving her information and photos of their ancestors to include in her book. This information helped her piece information together and identify some band members.

A majority of the women were at least half blood, and many were married to fur traders.

Biddle joined the band in 1837 and became its chief in the early 1860s. Her parents most likely came from the Odawa and Potawatomi tribes. However, it is unknown how much Indian blood Agatha had.

Agatha’s maiden name was Sarrasin, and she married a man Edward Biddle, whom she had at least four children with.’

Biddle maintained her Catholic faith throughout her life and was buried in Ste. Anne’s Cemetery on Mackinac Island.

Because the band was made up of members from many backgrounds, they didn’t have to follow typical rules of behavior and didn’t have to marry people outside of their birth clan.

That led to a lot of intermarriage among the members’ children.

Weller’s ancestor, Angelique Belonzhay, was the sister of band member Marie Charlotte Dejadon. It is believed that the Belonzhay women originated from Mississippi, but not much is known about the origin of their family.

Weller, a resident of St. Ignace and a freelance writer, said that the St. Ignace community is still extremely tight knit, and many residents there with French last names are descendants of women from the band.

“I’ve gotten a number of emails from people thanking me because I’ve confirmed ideas or theories that they’ve had,” Weller said.

Weller said she hopes readers learn more from her book about Native American women and the hardships they endured.

“The Founding Mothers of Mackinac Island: The Agatha Biddle Band of 1870” ($32.95) is available from Michigan State University Press and Amazon.